The week of April 17 through 22 was another busy time for NEXUS.  The first few days were spent in rehearsals for the April 19 concert at Trinity Lutheran Church in Kingston on the Ulster (NY) Chamber Music Series.  The repertoire included a new work, “Chiaroscuro,” by Baird Hersey for the vocal ensemble, Prana, and our special guest, Paul Winter.  Also on the program were new versions of “The Birds” and Russell’s “Sky Ghost” arranged for NEXUS with Prana and Paul. To round out the program NEXUS performed “Moondog Suite” by Russell Hartenberger, an arrangement of a piece for amadinda (Ugandan xylophone) titled, “Kalagala of Bembe,” and Bob’s arrangement of George Hamilton Green’s “Alabama Moon.” 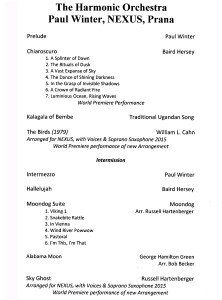 The rehearsals took place in Garry’s studio at the Woodstock Chimes facility in Shokan, NY.  Garry’s studio was only recently moved into a new space with plenty of room for percussion ensemble and gamelan rehearsals.  The most impressive feature in the new studio is the wall of gongs that are part of Garry’s massive arsenal of percussion stuff. 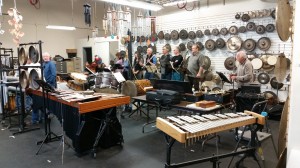 On the day of the concert, Trinity Church held its normal Sunday morning service, which ended just before noon.  That left only 2-hours to unload the rental truck – which was packed front-to-back and floor-to-ceiling with instruments – and then move everything into the church to set up before the house opened at 2:35 PM for the 3 PM concert. 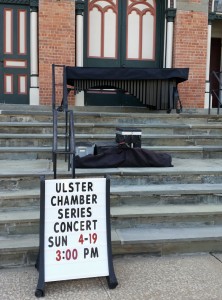 The 650-seat house was full as the program opened with Paul Winter’s distinctive and introspective soprano saxophone sound.  NEXUS’ association with Paul Winter goes all the way back to the 1970s.  Bob Becker and I first heard the Paul Winter Consort live in Kilbourn Hall at the Eastman School, when their “Road” album was recorded, including the Consort’s signature piece “Icarus.”

Later, Bob and Russell met Paul while they were at Wesleyan University in Middletown, CT.  Shortly after hearing the Consort again at the Chautauqua Institution, Bob and Russell were both invited to perform with the Consort, which they did for several years in the 1970s.  In the late 1970’s Paul became familiar with the NEXUS improvisations, and I was also invited to perform with the Consort, which I did several times, all the while juggling my commitments with NEXUS and  the Rochester Philharmonic.  More recently, from 2000 to 2005, I participated in the “Winter Solstice” events at the Cathedral of St. John the Divine in NYC.

The standing ovation at the end of the concert required an encore, so all of the performers joined in playing a version of  “Amazing Grace,”arranged by Rick Kvistad and Baird Hersey.

After the performance all of the instruments had to be packed and loaded back onto the truck to be unloaded and reset again in Garry’s Woodstock Chimes studio for a recording session the following morning.  Baird Hersey and Prana wanted to record “Chiaroscuro” for a new CD to be released later in the year.  The session went very well, and I expect there will be a formal announcement on the NEXUS website when the CD is released. 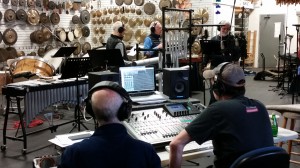