A few weeks after facilitating the 3-week summer  “Creative Music Making” course (July 6 to 25, 2014) at the Eastman School of Music, I received the following letter from one of the participating high school students.

“Hello Mr.Cahn.  How are you?  I took the improvisation class from you at the 2014 Eastman Music Horizons Program.  I hope everything is going fantastic at Eastman!

After I returning home from Music Horizons, I [realized that I] really loved the improvisation class, I really enjoyed the creative music process, [so] I started a club at my high school.  It is a small string ensemble. The string players in my school aren’t that great, and it is a sports-oriented school, so not that many people joined the club, and some people dropped out because they were too stressed about their playing level.

So I was thinking about bringing the idea of the creative music process into the club and starting an improvisation session.  I have a few ideas in mind, but it is so hard for me to know where exactly I should start this and how?  I like that improvisation is free from technique and playing level, so everyone will be able to enjoy it.  But how can I let people accept the idea of improvisation?  Many people are scared to learn solo playing and improvising.

It would be great if you could just spell out some ideas for me and maybe suggest something that I need to pay attention to when I start the improvisation group.   I would really appreciate [your thoughts],”

Here is my reply:

I’m glad that you are inspired to continue pursuing Creative Music Making.  As was described in the very first session at the Eastman School this past summer, the process is very simple – there are four steps (play, record, listen, question) and only two simple rules for playing (each player can play whatever they want to play, and each player should try to listen, BUT there’s no penalty if a player doesn’t listen).

I would suggest that you gather together a few (no more than 4) other players who are interested in experimenting.  Invite them to a rehearsal (which you must organize) and tell them it will only last 1-hour (and then be sure it is not longer than 1-hour).  During that hour, start by giving each one a copy of the sheet that describes Creative Music Making (it is attached as a 2-page PDF file which you are free to copy).  Then play and record one or two short improvisations, listen to the play-back, and have everyone describe what they hear.  That’s it!

Schedule another 1-hour rehearsal in the future for those who want to continue.

After the 2nd rehearsal, schedule a short performance in your school – maybe for the music department, or maybe for the school assembly, or maybe on  one of the school concerts.  At the perfornance, be sure to tell everyone in the audience what you are doing (the 4-steps and 2 rules).

PS. There is a lot more information about this process in my book, “Creative Music Making” (Routledge Books, 2005),   The book is available online (Amazon.com or Alibris.com) or it can be purchased directly from me – $29.95 + shipping. 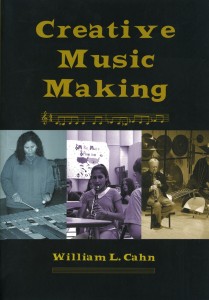