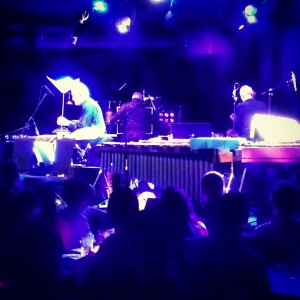 Bloggers have been boosting NEXUS since their June 18th appearance at (le) poisson Rouge in New York City. This surreal photo of NEXUS at work accompanies Tom Brett’s article at his blog Brettworks.  Here are some highlights to whet your appetite, and he includes some great YouTube clips too:

“Nexus is a Toronto-based percussion ensemble that has been making hard-to- classify music using a massive array of instruments for over three decades. ….The history of Nexus is in part a story of how “world music” traditions–from Africa, from India, from Indonesia, among many other places–have influenced and shaped the practices of Western percussionists and percussion music in general. Once upon a time, this kind of cultural encounter would have been called fusion, but the work of Nexus reminds us that all music is world music, blendable and blending together in one big sonic stew. To illustrate, consider Nexus’s hour-long, non-stop set at Le Poisson Rouge in New York City earlier this week. They began with Fra Fra, their adaptation of a sequence of Dagomba rhythms…played on talking drums, gun-gon (a buzzing bass drum), shakers, and a whistle. Then it was off to Zimbabwe for a rendition of a traditional Shona mbira (thumb piano) piece …[that] faded into a long stretch of free improvisation, with each musician playing a small collection of instruments ranging from gongs…to bird whistles. It was during the bird call moments especially that Nexus’s subtly deep musicianship reminded the audience of the startling things that can happen when we listen… micro sounds, quiet sounds, overlapping and uncertain sounds in close dialogue with one another that seem to surprise even the performers themselves as they’re making them. That’s a musical lesson I really want to remember.
“The free improvisation and bird soundscapes segued into a rendition of Steve Reich’s early minimalist classic, Piano Phase (1967) played not on pianos but on custom-made wooden akadinda-style xylophones. For me, this was a particularly significant moment in the set as it was a beautiful example of Western and non-western musical traditions colliding and resonating together. On the one hand, we have a piece by Reich, one of the most significant of living classical music composers, … . On the other hand, we have Nexus’s custom-made akadinda (one of the group’s members, Gary Kvistad, is also an accomplished instrument designer)… which is originally an indigenous percussion instrument from Uganda. …Nexus then continued Piano Phase on a set of horizontally positioned tuned wind chimes and then, changing from mallets to ping-pong paddles, on a vertical set of tuned plastic tubes to make a more . . . wonky sound….And finally, as the Reich on wind chimes faded, its motif was picked up on the (western) xylophone… and with that Nexus dove into a series of frenetic yet note-perfect early 20th-century ragtime pieces from the golden age of dance bands when the xylophone was king. When they were done, the audience was on its feet, cheering for encores as if surprised and wondering: Who knew that percussion could do all this?”
Check out the full article by clicking here, and enjoy some great insights into world music, NEXUS, culture and sound.

Henceforth Records’ blog called So Forth    has great photos of the night’s performances, and demonstrates that it’s always fun to introduce new audiences to NEXUS. Blogger B.Wright chose to lead off with a shot of NEXUS onstage, and writes:
“Nexus, a great quartet of percussionists who apparently are the grand early group who mentored many of the young percussionists. I had not heard of them but was mightily impressed by their performance of five pieces especially the last one which was a collection of great Ragtime Xylophone Music composed by George Hamilton Green.” Wright finishes the review with an interesting comment: “I’ve come to believe that percussion is the way in to “new music” for many.  It has discernible rhythms and that helps get over the hurdle of how to listen to unfamiliar.”

Hope you were there! If not…..Next Time!