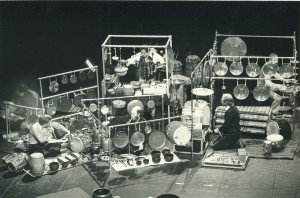 In December, 2011 I received a request from Yale graduate student Victor Caccese to answer a few questions about how NEXUS began and developed.

VC: Mr. Becker, I mainly wanted to ask you about the start of NEXUS with your first performances in 1971. Even though all of its members have accomplished a great deal by themselves I want to focus on the percussion group NEXUS and how it has grown and flourished through the years.

BB: I must point out first that my answers to all of these questions are personal, and I’m certain you will receive different (and in some cases wildly different) responses from the other members, past and present, of NEXUS.

In Rochester, NY during 1970, Bill Cahn and I began to practice and experiment with free improvisation using a collection of found instruments, non-western percussion instruments, and homemade instruments. At first, we simply played together in Bill’s home and recorded our experiments. My composition teacher at Eastman at that time, Warren Benson, agreed to listen to these recordings and discuss them in my lessons. He was very supportive about it, and offered many suggestions and observations that were interesting and provocative. At the same time, Bill and I began listening to recordings of music by the American composer Harry Partch. Partch’s music, and particularly the sounds of his chosen musical instruments – many of which were percussion instruments, and all of which were constructed or adapted by Partch himself to express his elaborate 43-tone scale – was a big inspiration both in its complex tuning and simple rhythmic construction. Although we didn’t really understand the highly mathematical acoustic theory underlying Partch’s harmonic concepts, we could enjoy the resulting very complex frequency relationships, which often sounded similar to the random tunings in the collection of instruments we were accumulating to use in our improvisations.

Bill and I named our duo “nexus“, after noting and learning the word in Partch’s book Genesis of a Music. We created a publicity brochure and were able to find a few public performance opportunities in the Rochester area during 1970 and 1971. Benson, who was following our work, decided to invite two percussionists then living in Toronto – Robin Engelman and John Wyre – to join Bill and me for an improvised concert in Kilbourn Hall at the Eastman School of Music in May of 1971. That concert, and another one the following day at a local church, were the inspiration to continue playing together in a free improvisational way (that is, without any predetermined structures or rules). Bill and I knew both Robin and John from previous musical experiences in classical orchestras and chamber ensembles, in particular a performance of Stravinsky’s Les Noces at the Marlboro Music Festival in 1968, and in the Rochester Philharmonic Orchestra, where Robin was principal percussionist during the 1967-68 season. There were instant feelings of camaraderie, shared musical sensibility, curiosity, irreverence and discovery among the four of us. Although there was no decision at that time to create a formal ensemble, I think we all knew something had begun that was going to continue and grow.

VC: As a student it can often be difficult to balance the building of a career (in this case NEXUS) and the training efforts of becoming a successful percussionist. What fears and excitements did you possess in the early stages of NEXUS’ development?

BB: I don’t remember any fears – in fact, that absence of fear, concern or worry, both in relation to career development and to concert performances, was one of the most persuasive and seductive things about the group for me. Of course, the general social climate in the United States and Canada during the 1960s and 70s was highly supportive of the kind of free and democratic philosophy NEXUS applied to both organization and musical performance. It would be very difficult to replicate that kind of thing in the current political/social/financial atmosphere, especially for young people beginning a musical career.

VC: Which collaborations and/or commissions do you consider most dear, or rather most influential, in your career with NEXUS (these can be other performers, visual artists, composers, etc.)?

BB: The first piece commissioned by NEXUS came from the Canadian composer Bruce Mather in 1977. At that time, Bruce’s music was known only vaguely by most of us, but Robin Engelman had become an admirer. He made the commission application, and he decided it should be a quartet so that the four members of NEXUS living in Toronto (Bill has continued to reside in Rochester, NY throughout the group’s history) could rehearse without travel and scheduling concerns. Michael Craden, also a member of NEXUS at that time, was a staunch non-reader of musical notation, so he was also excluded. It was the first piece we rehearsed in a concentrated, traditional way. Although NEXUS was already performing Cage’s Third Construction by this time, we had learned and practiced it somewhat haphazardly while touring. Bruce’s piece, Clos de Vougeot, was the first in a slow but continuous commissioning of new works by the group. In all, we have three major compositions by Mather, one of them a concerto. He became an intimate and very influential mentor to Robin over the years. NEXUS has commissioned and received more than 40 new works, not including the many pieces composed by the group’s own members. As usual with new compositions, many did not stay in our repertoire, but others became very successful. Probably the most outstanding piece we have, and the most often performed of our commissions, is Toru Takemitsu’s concerto From me flows what you call Time. Takemitsu was influential for NEXUS in many ways, both as a composer (we performed his trio Rain Tree nearly one hundred times), and as a facilitator and impresario (he introduced the group to Jo Kondo, who wrote two major works for us, and he arranged several of our Japanese tours).

VC: Lastly, I was wondering if you could just briefly talk about your experience over the years with NEXUS? I imagine that it must have been a joy to share a large part of your performing life with other percussionists and friends you have in NEXUS.

BB: Yes, it has been. NEXUS is far more than a musical ensemble of which I happen to be a member. It has been a support group, a forum for composition and experimentation, an educational resource, a financial cushion, and an extended family, with all of the joy, sadness, love and craziness that “family” implies.