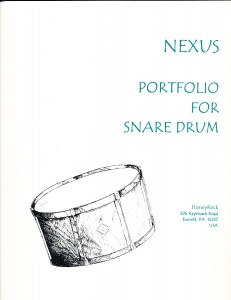 In March, 2010, I received a request from graduate student Bruce Salyers to answer some questions about my drum solo New-thaan, which is included in NEXUS Portfolio for Snare Drum, published by HoneyRock. Bill Cahn recently posted his answers to similar questions about some of the pieces in Portfolio, and so I thought it might be interesting to add my perspective.

BS: Although New-thaan is thoroughly influenced by Indian musical traditions, I would call it a rudimental snare drum solo. Would you classify it that way as well?

BS: I must admit my knowledge of tabla playing and Indian music in general is very lacking. Other than the 16 beat cycle that accompanies the solo, what other Indian influences can be found in the solo?

BB: As mentioned in the notes for the piece, the title New-thaan is a play on the word uthan, a form of elaboration that opens a tabla solo, as well as a Kathak dance performance. In the tradition of solo tabla performance, the uthan is usually improvised according to certain stylistic practice, but there is also a repertoire of composed uthans. I based the approach to structure in New-thaan on my understanding of the improvised style, as well as on the composed uthans I have been taught. Specific forms that I used include tihais – three part rhythmic cadences very commonly found throughout Hindustani music, as well as the 16-beat cycle that you mention.

BS: You explain several rhythmic concepts in your rhythm method book, Rudimental Arithmetic. Did you directly apply any of these concepts to your composing in New-thaan?

BS: You have written several pieces featuring the snare drum. Do you have plans for more pieces in the future?

BB: I have an idea about writing something for snare drum and piccolo. Although it would not be in the fife and drum style, it would reference that tradition. Of course this time I want to try to apply some of the more complex cross-rhythmic concepts examined in Rudimental Arithmetic.

BS: The snare drum solo is an important part of percussion education. Do you see it ever developing a wider audience with the general music appreciating public?

BB: I think the sound of the snare drum, especially the military snare drum, resonates deeply with the general public of North America and Europe. I know the very theatrical style of solo snare drumming that has grown out of DCI competitions and things like Brass Theater is very attractive to a wide general audience. Still, the abstract and technically intricate things that are presently a standard part of percussion education – things like Delécluse, or even the etudes in my book – are unlikely to be understood or appreciated by a general musical public.

BS: Can you provide any insight into John Wyre’s piece, Cinq?

BB: I had no discussions with John about Cinq, but I know he was always enamored of compound time signatures – 6/8, 12/8, 15/8 – because of the ambiguity in the feel: when is the beat a dotted note and when is it not? When I look at John’s notation for Cinq, I feel like I hear him playing it on a hand drum, like a darabuka, much more than a snare drum. I think it would be very appropriate to perform it that way, because John loved to play darabuka as much as he loved timpani. He was never much into the snare drum from a technical point of view.