Recently I saw in the local newspaper that there was going to be a guided tour dealing with the American Revolution at the Mount Hope Cemetery in Rochester.  Of course, there are a number of luminaries buried there – Susan B. Anthony (women’s rights leader), Frederick Douglas (antislavery advocate), and Col. Nathaniel Rochester, the founder of the city in the early 1800s.

There’s also a section in the Mount Hope cemetery called, “Revolutionary Hill” where a number of soldiers who took part in the Sullivan Expedition of 1789 against the Seneca Indians are buried.  As a result of General Sullivan’s expedition – which was carried out under the direct order of George Washington – the Senecas lost most of their land in western New York.  This land was then partitioned out in land grants to veterans of the Revolution in payment for their service (in lieu of monetary compensation, because the new federal and state governments were broke at the end of the war).  As a consequence, there are grave sites of veterans of the Revolution to be found throughout the region, including those at Mount Hope Cemetery.

Then, a few days after the tour an e-newsletter arrived from the Percussive Arts Society with an article on John George, who lies buried in a cemetery in Indianapolis (PAS offices are there), and who is also named as a drummer boy for Washington.  To sees his bio,click here – John George

It’s certainly possible that when they were boys, both Millener and George did service with Washington’s body guards, but it’s also possible that one or both may (or may not) have only crossed paths with Washington at some point in time, but without serving directly in his body guards, and that later in their lives they embellished on their service history.  One red flag is the incorrect name on Alexander Millener’s Pension Certificate.  It names “Alexander Maroney” instead of “Alexander Millener.”  Either the U.S. War Dept. made a mistake or Millener conveniently assumed the history of a drummer boy for Washington.

I mentioned these thoughts to Robin Engelmen about whether or not these various drummers were actually attached in an official military way to Washington and did service directly under him as part of his guards or assigned to him in battle.

Robin said, “In a very real way, every drummer who served in the Continental Army was “Washington’s drummer”.  After all, the army itself was considered Washington’s.  And they thought of themselves as such.  Perhaps they were not being disingenuous nor even guilty of glorifying themselves with such an appellation. It’s quite possible that in their minds they were speaking the literal truth.”

Finally, there is another pioneer cemetary in East Bloomfield (NY) – the town next to ours – where  another drummer boy named, Jonnathan Adams, from the American Revolution is buried.  Below is a photograph of the headstone. 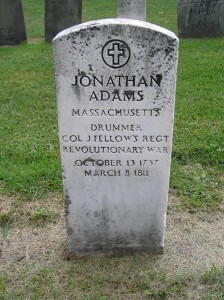 It is both astonishing and interesting to find these names from the past so close by, yet so unknown to some of us who identify with their commitment to drumming.

Hi Bill,
Thanks for this article. There are many, many interesting things around us, perhaps too many, but it’s always a delight when we discover them.
I’ll look into Toronto cemeteries and Fort York though I’d guess the American War fir Independence is not remembered as fondly here as in Rochester.

I am doing a history report about the Revolutionary War, and was advised to pick a small piece and focus on it. I think the articles found on this page will help me quite a bit. I look forward to getting and A on my report

By the time of the American Revolution the military practice of recruiting young boys to serve as “field musicians” was common. It is estimated that thousands of young boys joined the Continental Army and fought during the Revolutionary War. However, it wasn’t until 1789, when the United States War Department was established, that the first published references to the enlistment of underage recruits into the United State Army appeared.1 Boys 14 to 18 years old could be enlisted as fifers or drummers with their parents’ permission. Prior to that time, the consent of parents might or might not have been… Read more »

Hi Mr. Cahn, I do concede that in the British Army during the War for American Independence younger or “boy” musicians were more common, though I’ve yet to be convinced these youngsters were useful for campaign service. However, your article was in reference to the Continental Army, and, as such, is incorrect in that it was rare to see a boy musician in that army; for which see my article. The two drummers you write about were not “boys.” Cheers, John

Mr. Rees, It’s a matter of definitions; it depends on where one draws an arbitrary line between “boys” and “young men.” My previous response indicated that by 1789 “boys 14 to 18 years old could be enlisted as fifers or drummers.” If they were 14 to 18 years of age (or 16 and 17 as you correctly pointed out) they might be (and were) referred to as boys in their own time and in subsequent times. Please note that the linked articles on Alexander Millener and John George both refer to each of them as “George Washington’s Drummer Boy.” If… Read more »

Why did they use kids as drummer boys?????

During the American Revolution, it is estimated that thousands of young boys joined the Continental Army. Parental consent was not required until as late as 1802. The concept of childhood was very different in the Eighteenth Century from the way it is perceived today, and childhood in those days was of much shorter duration. America (and indeed most of Europe too) was an agricultural society. Children normally were given responsibility for farm chores from the moment they were physically capable of doing the work. Even in the emerging industrial economy children were viewed as sources of labor in factories. As… Read more »

I have run across some messages on the web regarding a drummer boy of George Washington’s, of last name Dennis, said to be buried in an old and quite small burial plot on Old Country Road in Middletown, NJ. It is called the Herbert-Cuttrell Burial Ground. I grew up nearby, and recall passing through it quite often when exploring the woods around it with friends. It was pretty much overgrown then but has since been restored by the local Boy Scouts.