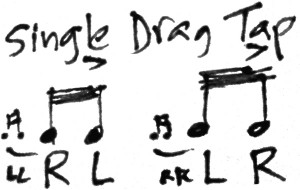 In May, 2011, John Wooton sent an email to many of his drumming friends and colleagues. In it he posed some questions about how to name a basic and historic rudiment. One of the first to respond was Dennis Delucia. There has followed a very interesting and entertaining email debate and discussion about this topic, which, in fact, still continues to the present time (July, 2011). I thought it would be worthwhile posting John’s original message, Dennis’s response, and my own response. In the past, both Bill Cahn and Robin Engelman have addressed some of the same questions on their blogs here on the NEXUS site.

JW: I recently posted a lesson on the Vic Firth web site that caused some controversy. The lesson was on the “Drag” or “Ruff”. The name of this rudiment is where the controversy lays. I called it a ruff and there were a few people, one in particular, that were rather vocal in their disagreement with what I called this little three note rudiment. After listening to a few opinions, some quite strong, I have changed my tune about what it should be called. With all the snare drum method books out there, one could make an argument either way as to what you call it. However, I do think that we have a responsibility in making sure we are consistent. One person said that a ruff is single stroked, which makes sense to me because a four stroke ruff is a single stroke rudiment. Haskell Harr calls this rudiment a ruff, as does Vic Firth, all of the Ludwig publications and numerous others. Several books call it a ruff or a drag. Some books call it a three stroke roll, which technically is a very accurate description. However, many books do call this rudiment a drag. The first snare drum method book to be written in the U.S., the Charles Ashworth book entitled “A New, Useful and Complete System of Drum Beating” (1812), calls it a “Half Drag”. He calls that rudiment followed by an eighth note a “Full Drag” and the succession of two grace notes with a sixteenth primary followed by an eighth note a “Single Drag”. Confusing? Hell yeah! And we know the rudiments. How confusing is this to someone just learning the rudiments? Those books will always be out there, so there will always be some confusion. So where do we go from here? I would love your opinion and I am going to re-shoot the video on the Vic Firth site so that I can clear up as much controversy as possible. The Vic Firth rudiment poster calls this rudiment a drag with “Ruff” in parentheses. Is there a difference?

Several have told me that people need to get a life instead of arguing about something like this. I tend to agree with that statement but I also agree that we need clarity on this for educational purposes. I said you can call it “Da-Da-Boom” as far as I am concerned, as long as you play it well. I don’t know if I can clear up any confusion but I feel it is my, our, responsibility to try.

DD: John is right – for the purpose of consistency, we in the “rudimental”/education field should agree on the terminology once and for all. THEN we can tackle the idiotic movement to attach stupid/silly names to any rudiment variation in the name of “hybridism”!!! And we wonder why fellow musicians question whether we “drummers” are really musicians at all!

BB: I’m not really part of the rudimental/education field, but I’ll add a few thoughts about this, because it seems to me the dilemma is one of nomenclature and oral articulation – how are common and, for that matter, uncommon patterns of strokes to be named in a sensible and consistent way?

The same dilemma exists in other disciplines. For example, something as “scientific” as particle physics uses a very unscientific mixture of terms to describe and name the elementary building blocks of matter. Over time, as particles were discovered or theorized, successive generations of physicists applied different kinds of terminology to naming them. Initially, terms like proton, electron and neutron were used. Later names were Greek letters (alpha particle, pi meson, etc.). More recently, far more whimsical names (some derived from literature) have been used – for example, quarks and gluons – as well as fanciful terms such as color and charm. As the number of particles grew, they were further categorized as bosons or fermions (named for two famous physicists, Satyendra Nath Bose and Enrico Fermi). It’s very similar to the growth of rudiment types over five or six generations of drummers. Each generation came up with its own ideas about creating and performing patterns of strokes, and when necessary or possible, each generation got to choose the names and terms for its ideas. So now we have two categories: traditional rudiments and hybrid rudiments, some named after famous players (Berger 25s, Hulka Helicopters), positions in early instruction manuals (the 25th Lesson in Strube’s Drum and Fife Instructor), connections to borrowed traditions (Swiss Army triplets), onomatopoeic solfege (tap, flam, ruff, diddle, ratamacue), technical description (drag) and, most recently, cuisine (Cheese, Egg Beaters, Pancakes) and pure whimsy (Doctoral Thesis, Rudy-Mental, Seinfeld).

It seems to me the rudimental community can either embrace the ambiguity inherent in a system like this (and celebrate the imagery and sound poetry of it all), or find a simple, systematic naming system based on the fundamental building blocks of rudimental sticking patterns: R, L, RR, LL, “buzz” (assuming the number of bounces is not quantifiable), and possibly their backsticking equivalents. Rimshots, rim strokes and stick-on-stick strokes may also need to be included. If the poing makes a comeback, add that in too. The hierarchy half drag, single drag, double drag, triple drag is an attempt at this kind of system. So is naming ratamacues single, double and triple. Measured rolls are the most thorough traditional example. Hierarchies like these are great for listing and categorizing, but currently don’t provide good practical syllables for orally articulating rudimental phrases.

I think a good case can be made for (re)designing and (re)implementing a practical system of solfege for rudimental strokes. The paradiddle was a pretty good shot at this, and anyone who has read through my book Rudimental Arithmetic, knows how well those three elements – pa, ra, and diddle – work to name and articulate any diddle pattern. The trouble with those syllables is that they are not great for rapid articulation. The best system for this that I know is the one associated with the tradition of tabla (North Indian hand drums) performance. It is far better than the well-known South Indian solkattu system for one reason – it eliminates all labial consonants (eg., m, b, w, v, f, etc.), which limit the speed and clarity of articulation because the lips have to move together and apart each time. Tabla solfege uses three tongue positions inside the mouth (and no lip movement) – similar to the well-known syllables used for double and triple tonguing on wind instruments – for all articulations: dental (eg., t, d, n), retroflex (same but with the tongue curled up against the palate), and velar (eg., g, k) made in the throat with the tongue at rest. And usually no two get repeated successively. In addition, Sanskrit based languages have both aspirated and non-aspirated forms of most consonants. The most rapid articulations are made with non-aspirated (i.e., no breath) consonants, while aspirated ones are used for longer durations and/or accents (ta, da, ga as opposed to tha, dha, gha). We can do this as English speakers, but in general we don’t – all English consonants are usually aspirated in normal speech.

Jazz drummers have a pretty good solfege system for articulating what they play on the set, even though I have never seen a written systematic explanation of it. I assume it is not explicitly taught, but it is surprisingly consistent if you listen to jazz players talk about licks. When I hear rudimental players solfege what they are doing, it sounds to me like they mostly use the same double and triple tonguing syllables that brass players use, as well as phrases similar to ones used by jazz players, and not the names of specific rudiments. In fact, orchestral players do pretty much the same. Hybrid names like Ziggidy-Bop and Chutudda reflect this (in fact, the former one would be really great if it didn’t use the labials in bop).

My feeling is either leave things alone and enjoy a rich and colorful history and tradition, or start over and create clear categories based on the fundamental elements of sticking patterns; and then design a practical system of solfege based on rhythmic articulation that has been shown to be successful in other forms of training and performance.

Sorry I’m so late to this discussion! 1st year retirement “honey-dos” are
now out of the way!!
I’ve always thought that ruffs, be they 3-stroke (LLR & RRL) or 4-stroke
(LRLR & RLRL) are “simple” rudiments. Drags, however, be they single, double, dragadiddle etc., are “compound” rudiments that incorporate ruffs followed by other notes. Likewise with flams vs. flam taps, flam accents, flamadiddles etc.
Logical, yet probably incorrect?
Bill Platt