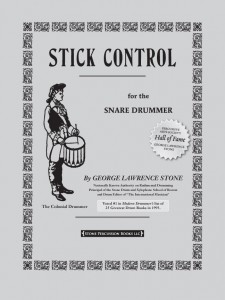 George Lawrence Stone’s Stick Control for the Snare Drummer first appeared in 1935. With a terse two-page introduction followed by a mere 21 pages of what he called “practice rhythms”, Stone unleashed a new and powerful method of technical development for all styles of drumming. The “HOW TO PRACTICE” page alone is worth the price of the book, and, although he never uses the word exercise, he explains clearly how to use his “conditioners” in a progressive and ambidextrous calisthenic routine, leading to speed, endurance, power and precision.

On the first three pages, Stone lists 72 sixteen-stroke phrases he calls “Single Beat Combinations”. Carefully chosen from the 216 = 65,536 permutations possible using only right and/or left hand single strokes, these figures define a comprehensive approach to freedom and flexibility with sticking. The 192 “Flam Beats” paved the way for the wrist and finger stroke control styles of Wilcoxon and Morello, and continue to be among the most effective and challenging practice patterns I know.

This year (2009) Stick Control for the Snare Drummer was re-released by Stone Percussion Books LLC. The new publication is nearly identical to the original, with a slightly sturdier cover and somewhat crisper and larger fonts. Anyone familiar with the original version will immediately recognize the old layout, notation and symbols in the new one. A nice addition is a short biography of Stone, with some vintage pictures including a great one of him behind his drumset in the 1960s. George Lawrence Stone (1886 – 1967) was one of the founders of the original National Association of Rudimental Drummers (NARD), which selected and standardized the “Thirteen Essential Rudiments” still used by drummers today. He was inducted into the Percussive Arts Society Hall of Fame in 1997.

As is typical of modern publications, this one contains two pages of testimonial quotations, including one by me. Also, as usual, my quote was heavily edited without my being asked – reduced from the first two paragraphs above to two clipped sentences. It’s one of the reasons I generally avoid giving quotes and endorsements. Nevertheless, this is a historic and important method book, and it deserves to be promoted with enthusiasm. For anyone unfamiliar with Stick Control and its concepts, I highly recommend taking a look.

It’s always interesting to learn a bit more of the historical context of these staples in drumming pedagogy. It’s too bad that your quotes aren’t treated with more care as I am sure that you take a good deal of time to write them : )

As a side note, I’m a little curious to know what brought about the change in standard flam sticking notation.

I LOVE stick control. However, after assigning it for years to students they never did much of it and “fell off the wagon” claiming they got bored with it. I realized I too didn’t have command over much in the book. One page a day would take you 41 days to complete and every day would only be one type of pattern. I renumbered the book so that every page looks like the first one with 24 exercises. The pages with 12 I just started numbering again from the top of the page 13 down to 24. Every page now… Read more »