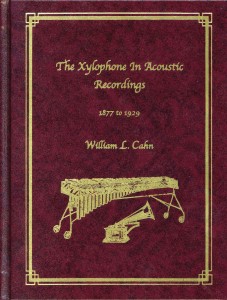 Recently I received an inquiry from Jon Singer, a percussionist in Brooklyn, NY.  He had a copy of my 284-page discography, “The Xylophone in Acoustic Recordings. ”  Jon had just met with Arnie Lang who was a student of Billy Gladstone.  Arnie remembered Gladstone playing a ’78-rpm record in a lesson.  The music consisted of popular tunes and ragtime on xylophone.  Since then Arnie hasn’t been able to find it and wonders if he made up some false memory.  Jon wanted to know if there are any examples of Gladstone’s xylophone playing other than on a recording of  “Ida/Some of These Days medley.”

Jon was also interested in klezmer playing on the xylophone. He came across a record by Jacob (Jake) Hoffman titled,  “Doina and Hora” (listed without the title in my discography on page 169) from 1923.  Jon asked if I have heard any other examples in this style.  Jon said that the xylophone playing on the Hoffman record seems to be an improvisation with Kandel’s Orchestra suggesting that Hoffman was a working klezmer musician as well as orchestral percussionist.  Finally, Jon wanted me to tell him something about my background with xylophone research and whether I have any plans to be in New York City any time soon.

Here is my response to Jon.

I have not crossed paths with any recordings by Billy Gladstone, including “Ida/Some of These Days medley,” which was quite possibly an electric-process recording made after 1929 and therefore not included in my book dealing with acoustic recordings.  I’ve never even heard of any records by Gladstone.  Nor have I any knowledge about Klezmer xylophone recordings other than the one mentioned (which I also had never heard). {Jon graciously emailed an audio file of “Doina and Hora” to me] Click below to listen to this recording

Both Bob Becker and I had played arrangements by George Hamilton Green when we were studying with William Street at the Eastman School of Music from 1964 to 1969.  My interest in the music was increased by performing the music of G.H. Green in the 1970s with Bob in NEXUS.    Finding an old ’78-rpm record by G.H. Green in an antique shop got me interested in researching  old records featuring the xylophone.  The book/discography was the result of a 10-year personal research project (1970 to 1980) involving the collection of old records, record catalogs, record-industry magazines, and library archives in Rochester and in New York City.  The book is admittedly incomplete, because there were numerous recordings made by players and small companies whose files have been lost to history.

I occasionally get down to NYC when I perform with Paul Winter in his Winter Solstice concerts in December at the Cathedral of St. John the Divine on Amsterdam and 110th.  Last December I missed it because I was teaching in Japan, and I may be doing the same this year; I don’t know for sure yet.  In any case, I send best wishes.

There is a 1928(?) recording by the Abe Shwartz Orchestra of a piece called Di Rayze Nuch Amerike (The Trip to America). This also features Jake Hoffman on xylophone. The piece, which is partially written in a klezmer mode, is a Sousa-like march.