I’m home again after a 12-hour straight-shot drive from Pembroke, North Carolina that included about  20-minutes of dead-stop traffic on the Washington, D.C. Beltway during the 5:00 rush hour. I was at the University of North Carolina at Pembroke as a guest artist in residence at the invitation of Dr. Tracy Wiggins, the UNCP coordinator of the percussion and assistant marching band director. 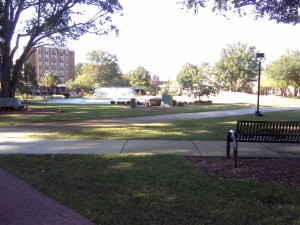 This residency was of particular interest to me because of the opportunity to work with the UNCP percussion students in preparing several of my own compositions, as well as to present workshops for music students – non-percussionists – in other departments.

The percussion program at UNCP is largely focused on marching percussion, and I had a terrific learning experience in observing a drum line rehearsal for an upcoming football game.  At the direction of Dr. Wiggins the line drumming – snare drums, quads (4-toms), 5 bass drums, and pit (electronic keyboard, mallet percussion, drum set) – the complex and intricate rhythmic patterns that were composed by Dr. Wiggins were performed with well choreographed ensemble precision.  The rehearsal was punctuated with the sound of amplified electronic metronome beeps.  The entire routine was memorized – an accomplishment that must have required weeks of preparation.  I was totally impressed.

While most of the UNCP percussion students came from marching backgrounds in their high schools, Dr. Wiggins considered it important to round out their college exposure to other musical genres, and this was largely the reason for my having been invited to visit.  Recent guest artists have included Eighth Blackbird, Nancy Zeltsman, Colin Currie, She-e Wu, Steve Schick, Nebojsa Zivkovic, and So Percussion.

The schedule for my 4-day residency was:

Monday – rehearsals of “Rosewood Dreaming” and “Night Ride” with the UNCP Percussion Ensemble;  a World Music class workshop titled “An Introduction to West African Drumming” attended by percussionist and non-percussionist students; and a “Creative Music Making” session that was  open to all instrumentalists. 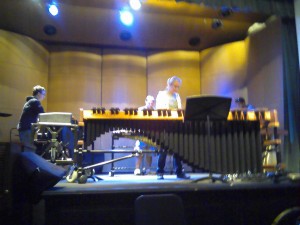 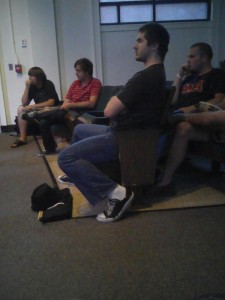 There was one very special moment for me in the CMM session that occurred during the playback of one of the improvisations.  The ensemble consisted of flute, double-bass, and marimba.  This was not only the first time these three students had ever performed together, it was also the first time they had ever created a freeform improvisation.  The music they made was obviously an enormous challenge for both players and audience, and everyone’s response in the discussion following the playing was luke warm at best.  However, the thought came to me out of the blue to try something in listening to the playback that I had never done before.  I asked if anyone in the audience was in possession of any book, and several hands went up.  I randomly selected one student who then gave me a book – a marimba method book.  In my mind I was expecting a novel or maybe a textbook, but certainly not a method book.

Anyhow, I decided that I would have to use what was handed to me.  I started the playback of the trio improvisation, lifted the method book and opened it at random to one of the opening-section pages.  As the recorded improvisation played in the background, I began to read from the page, making dramatic inflections in the text, which dealt with the layout of the sharps and flats on the marimba.  After a few seconds of reading, I looked up at the listeners in the audience, and saw wide eyes and big smiles turning into thumbs-up gestures and heads vigorously nodding with appoval.  I had assumed that ANY text would suffice to make the point, and my assumption was now proven to be correct.  After this workshop one of the percussion students commented to me saying, “now, I understand the Earle Birney pieces on THE BEST OF NEXUS compact disc.” 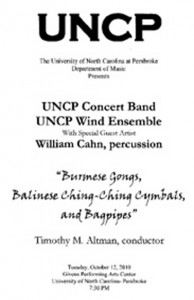 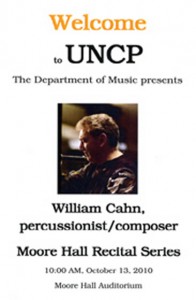 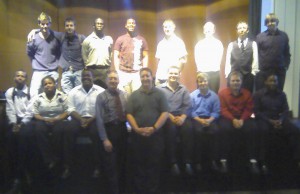 All of the pieces on this recital presented an enormous challenge for the performers, because the pieces are difficult, and while there were definitely some unsettled moments, I have to say that the students really rose to the occasion and played wonderfully.

For me, this was a personally rewarding visit to UNCP.  I was treated royally by Dr. Wiggins, Dr. Altman, the percussion students, and the faculty, and I thoroughly enjoyed my private housing at a cottage just off campus.  My thanks and best wishes go to everyone at UNCP. 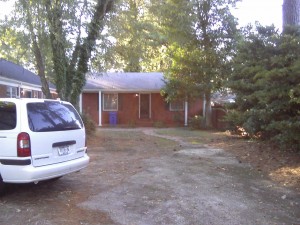