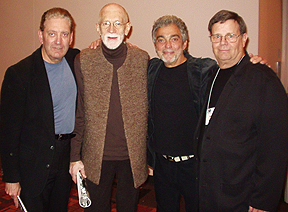 John Wyre, one of the founding members of the world renown percussion ensemble NEXUS, passed away on October 31, 2006 in St. John’s, Newfoundland, Canada, after a long illness. He is survived by his wife Jean Donelson Wyre.

Inducted into the PAS Hall of Fame with the other members of NEXUS in 1999 at PASIC ˜99 in Columbus, John told Percussive Notes, ‘We’re just one of the ripples on the pond. Through technology, music has exploded exponentially. We’re aware of so many different things happening around us now. Our world keeps growing – who knows how vast it will be in another hundred years. How deep will the archives be? How much stuff – good and bad – will people have to wade through to even find our music. Some future percussionists might come along and resurrect something that NEXUS has done the way Bob Becker did with George Hamilton Green. The fact that we’ve reached out and touched some people, inspired them to continue along the trail – that’s enough for me. I feel good about what we’ve done and we’ve made a positive contribution to percussion.’

Born and raised in Philadelphia, PA, Wyre played in the All-Philadelphia Senior High School Orchestra, studied with Fred D. Hinger (Timpanist with the Philadelphia Orchestra at that time), and became involved in Alan Abel’s Settlement Music School Percussion Ensemble (where fellow NEXUS members Bill Cahn and Russell Hartenberger would also play). John then went to Rochester, NY to study with William Street at the Eastman School of Music (which would also be the alma mater of another future NEXUS colleague, Bob Becker, as well as Cahn).

After leaving Eastman, Wyre played with the Oklahoma City and Milwaukee Symphony Orchestras before becoming the Timpanist in the Toronto Symphony Orchestra, a position he held for eleven season between 1966 and 1981. In 1968, he joined Becker and Cahn, along with Robin Engelman (with whom John played in both the Milwaukee and Toronto orchestras), and Hartenberger at the Marlboro Music Festival in Vermont and three years later these five musicians gave their first performance as NEXUS. (The late Michael Craden [1941-1981] was also one of the founding members of the ensemble).

For the next three decades, Wyre performed with NEXUS all around the world, playing music that ranged from traditional xylophone rags to Ghanaian drumming, from concertos composed for them to free-form improvisations. Did he have a favorite? ‘My very favorite thing that we do is a piece called ˜Tongues’,’ he shared in an unpublished interview. ‘Bob plays mbira. It’s very simple, which is a sweet thing. I could play that all night and never get tired of it.’

‘NEXUS is making music, exploring the world together, sharing the stage from individual spontaneity to exquisite precision,’ he wrote for PN in an article celebrating the ensemble’s 25th anniversary in 1996. Six years later, in another interview, Wyre explained why he chose to leave the ensemble. ‘It’s been 31 extraordinary years, but I want to spend less time traveling all over the world. I want to spend more time writing and I want to work with some other musicians as well. There are a lot of things that I’ll miss but I’m looking forward to some new horizons.’

Although NEXUS was an important part of his music life, he also organized and directed World Drum Festivals, played in numerous chamber ensembles, collected instruments and music of other cultures, and wrote a book Touched by Sound: A Drummer’s Journey. ‘My spiritual life is inexorably linked to music,’ he wrote in the book’s Preface. ‘Sound has always been at the very core of my being.’

‘John transformed time by being in its center,’ Robin Engelman stated. ‘He was also the greatest orchestral timpanist I had ever played with or heard. But John’s center is the memory I will always cherish.’

John Wyre’s life was hanging out with his friends and making music..

I had the distinct honour of spending a week or so at a music camp with Mr. Wyre in the summer of 1994. Being able to discuss music (although I mostly listened) with this man was a delight and something I will never forget. My deepest condolences to all of Mr Wyre’s family and friends.
Play on, John, and thank you for all you did!