Since the 1970s Ruth and I have occasionally vacationed in the Adirondack region of New York State.  The area is rich in the history of the eighteenth-century conflicts between the French and English for dominance in North America. Last summer (in August 2008) we spent a week with our kayaks at a cottage in Chazy, New York, on Lake Champlain near the border with Canada.  In the 1700s, that area was part of the major waterway passage running from Montreal and the St. Lawrence River down to New York City – a virtual straight line southward via the Richelieu River to Lake Champlain to Lake George to the Hudson River.  This waterway became dotted with forts and battlefields that saw action in the French and Indian War (1754-1763) and the American Revolution (1775-1783).

In 2008 we saw the Fort Montgomery ruins at the north end of Lake Champlain as well as Valcour Island – the site of Benedict Arnold’s famous naval battle in the Revolutionary War.  (Arnold’s fleet of small boats lost the battle, but the British advance down Lake Champlain was halted, buying precious time – a whole year – for the colonials to prepare for their victory at Saratoga.)
This year we rented a cottage near Schroon (pronounced, “Skroon”) Lake for another week of kayaking.  On August 19 we gave the kayaks a rest and drove about twenty miles to revisit Fort Ticonderoga on Lake Champlain.   The original fort had been constructed by the French (1755-1759) and was called Fort Carillon.  It was later renamed Ticonderoga under British control, and it played a very prominent role in both of the major North American wars of the eighteenth-century, but by 1800 the fort was in ruins.   The present buildings were reconstructed beginning in 1908.

This was our third visit to Fort Ticonderoga, but this year it was during the high tourist season; our previous visits had been off-season, so we had missed the performances of the resident re-enactors.  This time we were able to see a performance of the fort’s fife and drum corps – one snare drummer playing a long drum, one bass drummer playing a “Scottish” bass drum (with a shell depth greater than its diameter), and seven fifers, two of whom doubled on bugles.  It’s my understanding that bass drums came into regular use only after the American Revolution, so the realization of the music by the fort’s corps may not have been completely accurate in relation to the fort’s timeline.  We still found the performance to be interesting and enjoyable.

The snare drummer had a polished, rather than folksy, rudimental style (which we heard at Fort Mackinac, Michigan in 2003).  His high slinging of the long drum – well above the waist – and raised elbows hinted of a drum and bugle corps background.  Unfortunately, we did not converse with him.  The fifes played “British Grenadiers” and a number of other tunes, familiar and unfamiliar.  The corps marched smartly in step around the fort’s central parade ground.  Of course, shopping in the fort’s bookstore rounded out our visit.  I bought a few books including one about General Sullivan’s Expedition in 1789 against the Iroquois and British in the Finger Lakes region of western New York where we live.
Later in the day we drove about twelve miles north along Lake Champlain to Crown Point, New York, where there is a large historic site containing the ruins of two adjacent Forts: Fort St. Frédéric built by the French in 1734, and Crown Point Fortress, a very well-preserved ruin of an eighteenth century British fort built in 1759 – their largest in North America, housing 4000 troops.  In contrast to Fort Ticonderoga, the Crown Point site is virtually untouched by restoration.  The earthworks and remnants of the fortress walls remain intact, as do the ruins of several barracks – amazing!.  I had previously read much about Crown Point in relation to the French and Indian War, and I was totally surprised by the large scale and good condition of the preservation site.  A new visitor’s interpretive center added to the experience.  The center housed a small museum and provided a short historical film.     Both forts were ill-fated and short-lived.  The French destroyed Fort St. Frédéric in 1759 to deny it to the English.  Crown Point Fortress was destroyed by an accidental explosion and fire in 1773 and was abandoned. 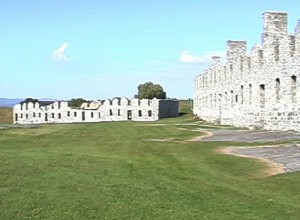 All-in-all our day of history was well fortified.  Tomorrow we”ll be kayaking on the Schroon River.
A Fortuitous Addendum – Saturday, August 23, 2009:
After kayaking on Eagle Lake in the morning we decided to drive 30-miles to visit the village of Lake George to see another eighteenth century fort – Fort William Henry which was reconstructed in the 1950s.  This historic fort was made famous in James Fenimore Cooper’s “The Last of the Mohicans,” in which the story is told of Montcalm’s seige and victory over British Colonel George Munro in 1757.  The four-pointed reconstruction of the fort is impressive with its horizontal wooden walls and numerous canon bays.  We saw a young (highschool-aged) costumed drummer and a fifer, but we arrived too late to hear them perform.   In spite of the fact that the reconstructed fort  is at the identical site of the original, it is today engulfed in numerous tourist and commercial enterprises.  Nevertheless, with a little imagination, the fort’s magnificent setting – at the foot of Lake George, with high, rolling tree-lined mountains crowning the shores looking northward – is very impressive. 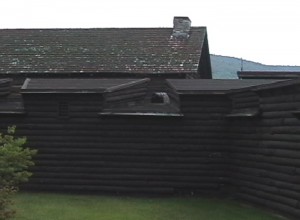