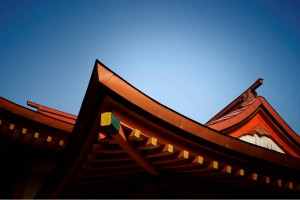 As you have doubtless noted, when looking at Bill Cahn’s busy schedule, JAPAN jumps out – home of taiko, kodo, the okedo daiko, kumi daiko, and a huge variety of bells and gongs. (Patrick Graham gives a nice look at Japanese Percussion here – scroll midway down the page).
Bill has been in Japan for much of this month – you can read all about it in his recent blog posts.  And of course Bill has had numerous Japan encounters with NEXUS. They have performed with the New Japan Philharmonic in Tokyo, and have also appeared over the years at Tokyo Music Today and Tokyo Music Joy. In all, NEXUS has enjoyed 6 Japan tours – so far!
In addition to the NEXUS trips, Bill has often enjoyed others.   Amakusa, land of 120 islands, is towards the southern tip of Japan near Nagasaki and is an area known for its festivals and cultural activities, friendly residents and fantastic seafood. In December 2007 and again this month Bill has been in residence at the Showa Academy of Music near Tokyo.  Bill’s composition “Where Sirens Dwell” was given its Japanese premiere at the Showa.
It is perhaps not surprising that the NEXUS members became such close friends with a special piece for NEXUS with orchestra, and NEXUS has recently arranged several of Toru’s songs which you can hear on the CD “Wings”. Just over a year ago, Bill oversaw the re-release of the NEXUS CD “The Music of Jo Kondo”, another major Japanese composer. Bill has also written an accompaniment for “A Page Of Madness”, a ground-breaking silent film directed by Tienosuke Kinugasa who is on record as saying he envisioned percussion as the accompaniment of choice for this work. You can read more about this very unusual NEXUS presentation here.   It would be interesting to explore in depth the Japanese influences on the music of NEXUS!