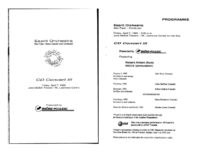 1995   CATHEDRAL SONGS, PEEPERS and COLGRASS   CBC Producer David Jaeger had asked the Winnipeg Symphony’s composer-in-residence Glenn Buhr “to compose a piece that would be an expression of musical community building. The work would be designed as a surround-sound symphony for performance in the Barbara Frum Atrium at the new CBC Centre: on the ground… Read more »

In 1993 two major composers – Michael Colgrass and Bruce Mather  – began work on commissions for NEXUS. Mather, an intimate friend of Robin Engelman, had already composed two quartet pieces for us: Clos de Vougeot (recorded on the LP Changes in 1982) and Clos d’Audignac (recorded on the CD Rune in 1997). The new… Read more »