In early August I was, for the second time, able to “see the U.S.A in my Chevrolet,” (a phrase that is most meaningful to the first-generation of TV watchers from the 1950s/60s).  The first time was in 1999, when Ruth and I drove for three long days in our spanking-new Chevy Venture van filled with percussion and electronic instruments to perform Mahler’s 6th Symphony at the Grand Teton Music Festival Orchestra in Teton Village, Wyoming. 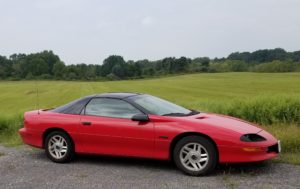 This trip involved two long days of driving in my 1994 fire-engine red, T-top Chevy Camero Z-28 from West Bloomfield, New York to Steamboat Springs, Colorado to perform in the Strings Music Festival. The Camero was loaded with percussion instruments – a large Chinese tam-tam, lots of cymbals, my 8-inch Radio King snare drum, a glockenspiel, a few triangles, a bag of sticks & beaters, and several cymbal and triangle stands and trap tables.

I had been invited by Paul Yancich to play in the Strings Festival Orchestra’s percussion section along with Peter Flamm performing the Symphony No.5 in C-sharp minor by Gustav Mahler. Paul, the renowned timpanist in the Cleveland Orchestra, had taken a few percussion lessons with me (and to be fair, with William Street and Saul Goodman) when he was in high school, so for me his invitation was meaningful, both personally and professionally. Peter, who is the Principal Timpanist of the San Antonio Symphony, was once a student of Paul, so the three of us represented three successive generations of musical continuity.

Tuesday, July 31, 2018 involved 13-hours of driving west on Interstates 90 and 80 through 6 states – from West Bloomfield through Buffalo New York, Erie Pennsylvania, Cleveland Ohio, South Bend Indiana, La Salle Illinois, and Des Moines Iowa to my overnight hotel in Council Bluffs Iowa. Ruth decided to stay home to attend to household concerns, so it was just me and the Camero. Fortunately (wisely) I had the car inspected completely by the local dealership a few days before departing from home, so it performed beautifully, easily embracing the 70 and 75-MPH speed limits (and occasionally higher, of course).

Wednesday, August 1 was a 9-hour day of driving west on I-80 through Omaha and along the ever-more-present mesas and rocky hills of western Nebraska, through Cheyenne Wyoming to Laramie, where I left I-80 and drove southwest through foothills and open range to Walden, Colorado, and onward, down a very steep mountain slope on Route 40 into Steamboat Springs. My accommodations for the next four nights would be at a very comfortable Holiday Inn.

I woke up early on Thursday because of the 2-hour time difference from home. At 8 AM I drove to the Music Pavillion, only a mile or so away from the Holiday Inn, to unload all of the instruments and stands and get everything roughly in place on stage for the 2 PM rehearsal. 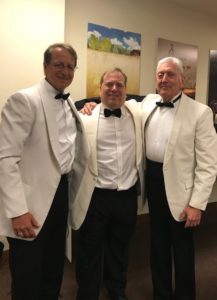 It was great to see Paul again; only a few months earlier Ruth and I had attended Paul”s performance of the Phillip Glass Concerto Fantasy for Two Timpanists and Orchestra at Carnegie Hall with the Louisiana Philharmonic Orchestra. Peter and I had only previously met through email exchanges to determine how the two of us would handle the Mahler 5th percussion parts, which ideally required four players. Early in the course of our emails I had decided to make my own percussion score, with all of the percussion parts combined, which was what we ultimately decided to use. The version of the Mahler Symphony to be performed at the Strings Festival was arranged (and recorded) by the Natalia Ensemble for an orchestra of reduced size, with only one each of flute, oboe, clarinet, bassoon, horn, trumpet, harp and timpani, along with reduced strings (3,3,2,2,1).  It would be interesting to hear how well this arrangement would work in contrast to the enlarged orchestra of the original score.

At 2 PM the downbeat was given by the conductor, Brett Mitchell, the Music Director of the Colorado Symphony. As the hour-long symphony was being read-through, beginning to end, for the first reading by the orchestra, I found myself frequently thinking to myself that the music was already being performed at a very high level, and in fact, that the symphony was virtually performance-ready. Brett Mitchell’s conducting was super clear, and emotionally appropriate to the music, and every single one of the orchestra musicians, mostly from the Cleveland Orchestra, was able to provide the sensitivity and virtuosity that is required by the reduced orchestration. With such playing it was clear that the Natalia version worked exceedingly well and was true in every important respect to the original. 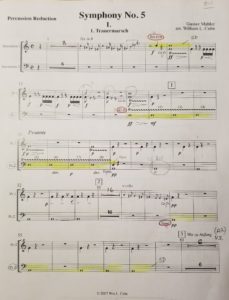 The second rehearsal of the Mahler began on Friday at 9 AM. Once again I marveled at the music being produced. The trumpet and horn parts, both very exposed and challenging throughout the symphony, were perfectly performed. Paul’s timpani sounded fabulous, always with perfect tone and pitch. The four drums were Walter Light models ca. 1980s. They belonged to Peter who drove them in his SUV from San Antonio. Brett Mitchel’s conducting was impressive; he knew which concerns could be resolved by the musicians without the need to stop the music, and there was a wonderful sense of ‘line’ (phrasing) communicated.

After the rehearsal we cleared the stage and stored the percussion instruments to make room for the evening concert by The Dustbowl Revival, an eight member Americana and soul band. In the evening I decided to instead, have my only restaurant experience in Steamboat Springs, so I decided to go to Low Country Kitchen, which specializes in Southern cooking.

The menu on their website had a fresh beet, feta cheese and greens salad that looked interesting, and their Mint Julep’s were highly recommended (along with their fried chicken, on which unfortunately, I decided to take a pass in order to stay true to my vegetarian regime). I was surprised when I entered the restaurant to meet about ten of the orchestra musicians waiting for a large table. Michael Sachs, the Music Director of the Festival and the orchestra’s solo trumpeter, invited me to join the dinner party, and while sitting next to Michael at the table, we enjoyed our dinner while conversing about music for reduced-size orchestra, including my library of thousands of 12-piece theatre orchestra arrangements published between 1890 and 1923; that discussion is to be continued.

After resetting the percussion instruments on stage, the dress rehearsal on Saturday began at 9 AM and finished early for the winds and percussion, to allow for the other music on the program to be rehearsed. The Festival Finale concert began at 7 PM for a virtual full house (1000 seats or so), and the Mahler was performed exquisitely after the intermission. The day (and a memorable week) ended with all of the percussion stuff being loaded into Peter’s and my cars, and the heart-felt farewells exchanged.

I departed Steamboat Springs on Sunday morning at 5 AM in pitch black darkness, on a rain-soaked (and therefore even harder to see) 2-lane highway, driving the sole car to be seen on the roads until well past sunrise, through the open range to Laramie, and then, staying just ahead of the heavy rains, on through Nebraska to my overnight hotel in Cedar Rapids, Iowa.  On Monday the remaining 9-hours of driving, with a short stop at Paul’s house outside of Cleveland, and then through a downpour in Erie that cut the visibility to a few dozen yards for a half-hour, got me home in good order in time for dinner with Ruth.