On Saturday Sept. 10 Ruth and I drove to Cuyahoga Falls, Ohio in the evening to attend a concert of The Cleveland Orchestra at the Blossom Festival. The weather became drizzly and yet it seemed that about 7 to 8-thousand people braved the dark clouds to be in the Blossom audience. (Fantastic!)

The main reason for our trip was to hear only the second performance of the “Double Timpani Concerto” by James Oliverio played by brothers Paul and Mark Yancich. 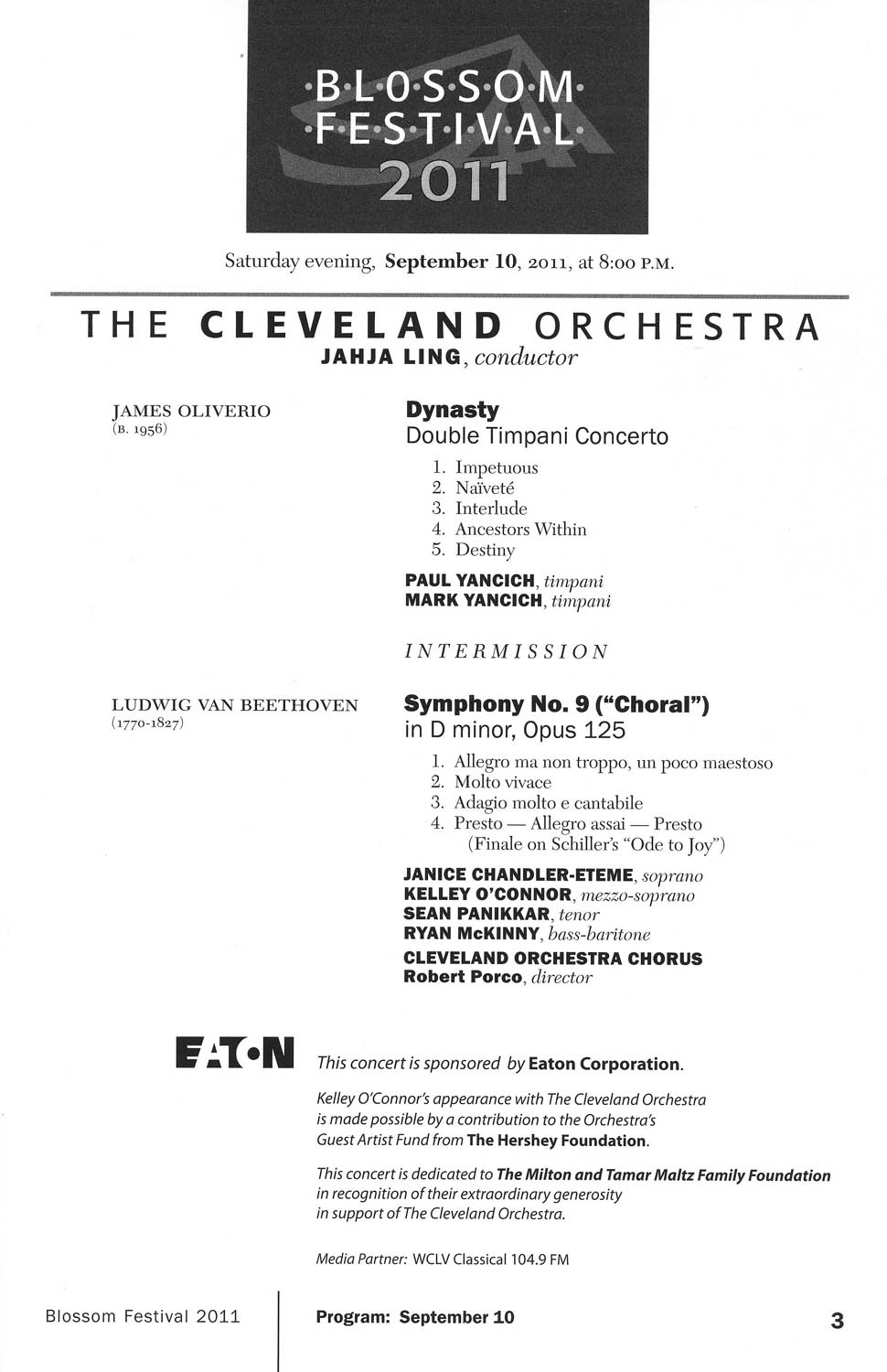 On the Blossom stage two sets of timpani were arranged around the podium forming a sort of copper curtain between the conductor, Jahja Ling, and the strings, but orchestra sight-lines were still good.  Paul and Mark entered, and they were wearing black long-sleeve shirts and pants, and after tuning drums for about a minute, the first of the 5 short movements in the “Concerto” was performed.

Our seats were under the roof near the stage so we were unaware of the weather, but it must have started to rain, because at the end of the first movement, dozens of people who probably had lawn seating were ushered to seats under the roof.  It took more than 5-minutes for everyone to find a seat, and meanwhile Jahja stood arms folded on the podium bantering with Paul and Mark.

The remaining four movements were performed with short tuning breaks in between during which the audience amazingly remained appropriately quiet.  The piece ended with a thunderous standing ovation and numerous curtain calls for conductor, timpanists and composer.  The composition very effectively showcased the timpani as capable musical vehicles, and the brothers Yancich were fantastic!  Their interlocking rhythms and melodic phrases were very precisely performed with style and balance.  The cadenzas allowed for some impressive complexities of execution, and the sound of the timpani was exquisitely matched and resonant with perfect intonation.  Both timpanists were cool, calm and collected throughout.  It was a very Impressive performance.  We also enjoyed Jahja Ling’s clear, committed direction from the podium.

The second-half was the Beethoven 9th and we were frankly amazed to see that Paul was playing.  He sounded really great and the ensemble with the brasses was always totally ‘on.’  The performance of the Beethoven received another standing ovation and curtain calls for Jahja, the vocal soloists and the orchestra.

After the performance there was a private reception in the adjacent shed, and Ruth and I greeted Paul and Mark with kudos.  We also saw our good friend, Pauney Yancich (the brother’s mom), whom we hadn’t seen since she moved from Rochester to Florida years ago.  We  had a wonderful time chatting with Rich Wiener (Rich and I both went to the same high school in Philadelphia),  and Jake Nissly, who had just played his first official concert as a new member of The Cleveland Orchestra.  Both Jake and Paul will be coming to the Eastman School this semester for masterclasses.  Paul introduced me to Jahja Ling who recalled the NEXUS performance at Blossom in August, 1988 when NEXUS performed “The Birds” and “Connexus” – very nice.

Great to finally meet you both at Blossom recently.
Thanks for your kind words about the DYNASTY DBL Concerto.
I have a few photos from receptionI could email if you’d like to forward the best address. Cheers, James Oliverio