At last we have received some snow at the Toronto office, so it feels more like the December holiday season! If you follow us on Instagram (@nexuspercussion) you will be familiar with the NEXUS office dog, who – as you can see – settles easily into “cozy winter” mode. All the NEXUS members are off in various directions to celebrate the holidays with family and friends both here and abroad. We have had a great November/December, presenting lectures, demos, and concerts at the Jackman Humanities Institute Symposium called “Reich, Rhythm and Repetition” which served too as the launch for Russell’s book “Performance Practice in the Music of Steve Reich”. Professor Stephen Morris  and Garry spoke at the Fields Institute for Mathematical Research, discussing the physics of music. Kathy Armstrong joined Russell for a joint presentation on The Use of Rhythmic Patterns in West African Drumming and the Music of Steve Reich and Ray Dillard (and the audience!) joined NEXUS in demo-ing Kathy’s African Drumming patterns. NEXUS performed Steve Re 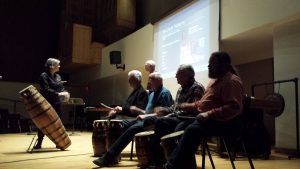 ich’s “Drumming Part 1” on EIGHT sets of bongos, so that was a first, and at the final concert of the Symposium, Gary and Russell performed “Mallet Phase”, Russell and Bob with Midori Koga and Gregory Oh gave Steve Reich’s “Quartet” its Canadian 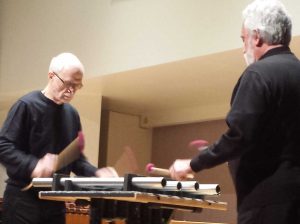 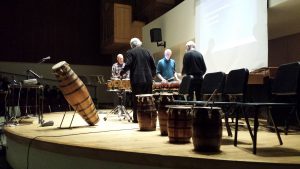 Drumming Part 1 on 8 sets of bongos.

premiere, and we also premiered Russell’s newest piece “The Birth of Time” with vocalists Suba Sankaran, Kathy Armstrong and Christine Duncan – a wonderful new work! We finished off the week over at Toronto’s “Music Gallery” for the Music Gallery’s Moondog 100 celebration. Sharing the stage with The Mike Smith Company, both groups presented a selection of Moondog’s quirky and sometimes confounding compositions. Suba Sankaran joined us once again for Russell’s “Moondog Suite.” Now it’s time to take a breather as we gear up for our spring dates, coming up in Texas and in Potsdam NY! Happy holidays to you all from NEXUS. 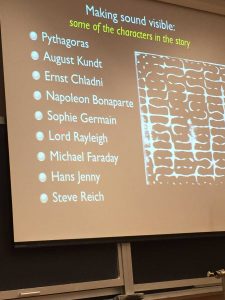 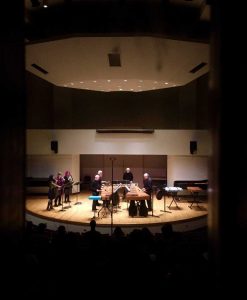 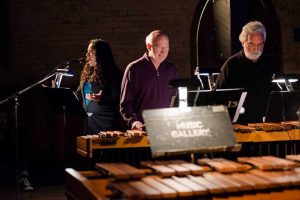 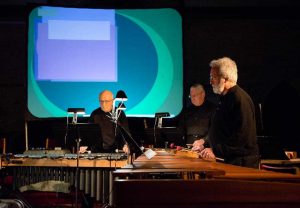 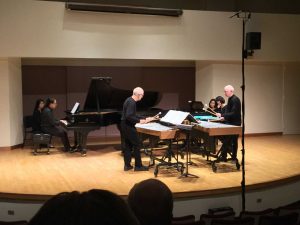