Another instrument inquiry from my email basket:

Question: “I’m curious as to how Humperdinck wrote the part [for cuckoo in his opera, ‘Hänsel und Gretel’] calling for this specific instrument, and having it in the percussion part? Was this a common instrument in Germany at the time? Or, [was it] having to do with silent film and/or vaudeville he knew of?”

Response: Without devoting the necessary time to do the research in a way that would satisfy historians and scholars I don’t have a definitive answer to your questions, so this response comes with a caveat that it is based purely on my own speculation derived from my travel experiences and my limited study of musical instruments – and percussion instruments in particular.

One observation is that there is a virtually universal human fascination with the sounds of birds. One sign of that fascination is the ubiquity of imitation bird-calling devices – small whistles, block flutes, reeds, scrapers, and much more – that can be found in cultures all over the world. Many such devices can be easily made from locally available natural materials, and they have probably been around for centuries, if not millennia, as practical tools in the hunt for food, or as a means to connect spiritually and aesthetically with the natural world.

It is reasonable to assume that manmade bird callers, and cuckoo callers in particular, were available as toys for children and as lures for hunters in Germany by the time Engelbert Humperdinck’s opera 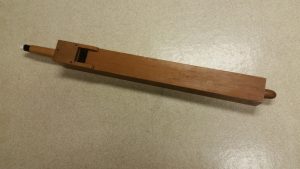 Certainly, there had been many types of pipe organs – small and large – throughout Europe for centuries. Most organs had stops consisting of wooden pipes, each of which was a kind of block-flute that sounded when air, triggered by a keyboard mechanism, was forced through the pipe’s blow hole.

Using a system of two small bellows and pipes [basically miniature block-flutes, very similar to small wooden organ pipes], the distinctive “koo-koo” sound of the German cuckoo clock was developed. Two small pipes were attached to the tops of two air-driven bellows that could mechanically send alternating puffs of air into each pipe to make alternating high and low pitched whistle-sounds mimicking the call of the cuckoo bird.

It would be very simple step to adapt this basic technology for the purpose of making a hand-held, mouth-blown device for use as a toy or a lure.

This is a lifesize photo of an all-wooden cuckoo call with a stamp indicating “Frank Wolf Drummers Supplies – NYC”. This call was probably manufactured around 1940 to 1955. The wooden ball on the right is connected to a wood rod with a thin wood plate on the inside that can be moved in and out to alter the size of the air space to finely tune the overall pitch of the call. Of course, the higher note of the 2-pitch cuckoo call is produced with the finger hole uncovered. By covering the hole the lower pitch is produced.

So, in answer to your questions, I do not think that Humperdinck was influenced by cuckoo callers being used as sound effects for motion pictures which were still in the very early stages of development. That kind of use wouldn’t even have been possible until the spread of movie houses in the first two decades of the twentieth-century, although it is possible that cuckoo callers may have been used in Germany and elsewhere in live theatrical productions. That being said, my educated guess is that cuckoo call devices – much like the whistles used today for “Hänsel und Gretel” (see the photo below) – were easily available in Germany by the 1890s. The sound of the cuckoo fits very nicely into the opera’s story as the main characters wander through the dark forest.

Thank you so much for this post and for continuing to shed light on these obscurities in the repertoire. I am performing the cuckoo part next week for the Canadian Opera Company Orchestra’s production of Hansel and Gretel. To my surprise, the cuckoo part is notated D5 descending Bb4, and the correct pitches are absolutely necessary. I was able to find a solution using an ocarina very similar to this one:

I hope this info is useful.