From time to time I receive questions regarding specific passages for percussion in the orchestra and chamber music repertoire.

Question: Can you shed some light on Stravinsky’s notation at rehearsal “29” in “Les Noces” in the caisse claire/tambour sans timbre part? 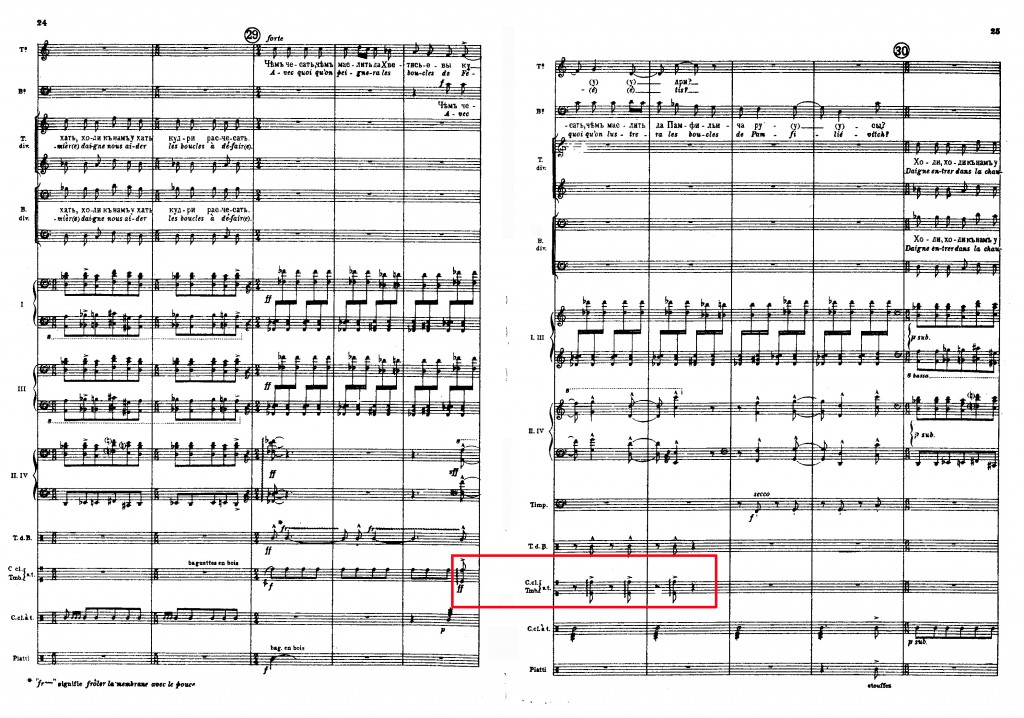 Response: I assume that this question is about the rolled-chords (vertical wavy lines) in front of the last eighth-note in the third bar after rehearsal number “29” and in the following two measures.

This is a perfect example of the kind of ambiguity that appears in percussion parts throughout the orchestral and chamber music repertoire. As is sometimes the case with percussion parts, it is entirely possible that the publisher, in the process of interpreting the composer’s manuscript while setting the type, has arbitrarily made an editorial decision about the composer’s intended notation.

Of course, where such ambiguities exist, there are several possible interpretations of how the notation should be rendered, and the performer must decide which option best suits her/his taste.  You can base your decision on any number of factors: what have other players done, what does the conductor want (but only when a conductor raises the issue first), what else is going on with the other instruments, what does the player’s intuition suggest, etc.

Having performed “Les Noces” a number of times, including the Caisse Clair/Tambour sans timbre part, I think there are several reasonable ways to interpret the rolled-chord articulation:

1) play the eight-note with the lower note as a grace note preceding the upper note (sounding identical to the notation of the first eighth-note (with grace note) right at the first bar of rehearsal “29.”

3) play the eighth-note as a double stop – exactly together.  (This is actually what I have done most of the time, but even so, I probably played it occasionally as having a grace note.)

Regardless of which of the three options is chosen for each occurrence, it would be extremely unusual for a conductor to challenge the player’s decision. So my suggestion is for the player to play it as he/she thinks best.   I hope this is helpful.