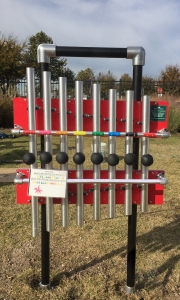 From Chimalong Junior to Chimalong Panacea, it’s all about children and music. In the early 1980s when Diane and I started our family, there were no high-quality musical instruments on the market for children that I was aware of. So I had an idea to take the musically tuned tubes from our line of Woodstock Chimes and turn them into a playable instrument for kids, which we called the Chimalong. With great serendipity, I was able to show this prototype instrument to Jim Henson of the Muppets and he was impressed enough to offer his endorsement. 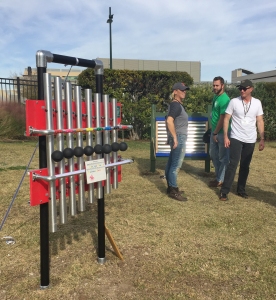 Thirty years later, the Chimalong is just as popular as it was at the beginning, and now we have built the largest Chimalong ever and installed it in the Healing Gardens of the Dell Children’s Medical Center of Austin, Texas. This is an amazing place—a state-of-the-art and aesthetically wonderful facility located in the open sky area north of Austin. They even have one of George Rhoads’ famous audio-kinetic sculptures in the lobby called “Carousaball”.

Someone had the vision to create a beautiful outdoor environment that allows children to play and heal while temporarily forgetting where they were. The gardens are full of fun things for the children to do, as a result of donations from many companies and individuals. Hundreds of volunteers from athenahealth, a national insurance company with a big heart, spent an entire day installing the exhibits and manicuring the gardens. The Healing Garden includes a few musical instruments, art projects, a fun maze and little nature trails with a beautiful pond in the center.

Garry and the Chimalong Panacea

The Chimalong Panacea is an eight-note playable metallophone with resonators and activator balls for each tube. We used our best materials to create a real musical instrument. There is a color and number coding system on the tubes, which relates to music that is mounted on a rail so children can easily play recognizable melodies such as “Amazing Grace,” “Yankee Doodle,” “Happy Birthday” and many, many more.

Panacea means “something that will make everything about a situation better.” It’s a universal cure. I firmly believe that music has that capability and hope that this instrument brings joy and healing to the children at this medical center. 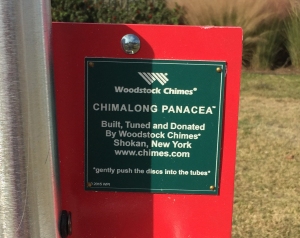 Everyone at Woodstock Chimes is very proud to have been asked to donate to this exciting project. If you ever get to that area, it’s worth a visit. The Dell Children’s Medical Center has won many awards for its mission of building green and sustainable facilities. Athenahealth encourages their employees to participate in community projects such as this on company time. The entire project was skillfully managed by a Colorado company called The Art Connection. Woodstock Chimes loves beautiful sounds and takes pride in its charitable mission.

The photos and videos were taken by Maya Kvistad prior to the installation of the resonators which are now on and give the instrument a rich resonate sound.