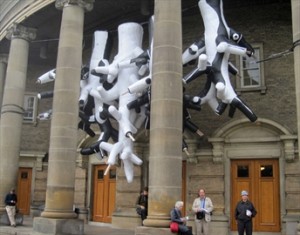 We are excited to share the news with you that NEXUS will be a part of the Open Ears Festival in June. This innovative art-and-sound festival in Kitchener-Waterloo, Ontario, only happens every two years. NEXUS will be performing in concert with the beautiful Sepideh Raissadat, the first female vocalist to publicly perform in Iran after the revolution of 1979. Russell Hartenberger and Sepideh are preparing new material for this event, which is sure to be haunting and beautiful. NEXUS will also participate in a performance of Steve Reich’s Drumming, featuring an ensemble of nine percussionists, two vocalists and a flautist. With NEXUS there, that means you will have a chance to hear three original members of Reich’s ensemble: Bob, Russell and Garry! You can read about the other plans for this ear-opening month of events in The Record: “June showcases month of innovative art and sound across Waterloo region”.

The photo, compliments of Open Ears, is the Tree Organ, an inflatable sound installation by Max Streicher and Garnet Willis. Blowers inside provide air to organ pipes cued by computers creating sound that can be played by a midi keyboard!