The weather cooperated fully on Sunday, September 15 as sixty-six percussionists from Rochester and Buffalo unloaded several carloads of drums, cymbals, tam-tams, sirens, and assorted sound-making implements at the High Falls historic area along the Genesee River in downtown Rochester, New York.  The skies were partly sunny and the temperature mild on this late summer day – perfect for an outdoor performance.  The percussionists were gathered for a Rochester premiere performance of “Inuksuit” by the Alaskan composer, John Luther Adams.

On the day prior to the performance, everyone had come to the Eastman Theatre in Rochester  to experience their first and only rehearsal for the hour-long piece.  The rehearsal and performance was directed by percussionist Doug Perkins with help from percussionist Amy Garapic.  Both were visiting Rochester from the New York City area, and just a week earlier both had supervised a performance of the work in Milwaukee.  With the enthusiastic support of Michael Burritt, Professor of Percussion at the Eastman School, the project was organized in conjunction with the Rochester Greentopia Festival, a community celebration of environmental sustainability running from September 10 to 15.

The title of the work to be performed, “Inuksuit” (or also “Inuksuk”) comes from a native American word that basically means a representation of a person, often by means of strategically layered stone piles which can serve as a trail or boundary signpost, or even as a marker to commemorate an important event. 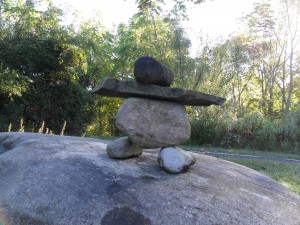 “Inuksuit” was composed in 2009 and it has had unusual success with a number of outdoor performances in parks, and open wilderness settings.  But, this Rochester performance would take place in an urban 19th-century industrial area mixed with the natural setting of the magnificent Genesee River waterfall and gorge.  The Musicians would be spread throughout the site – along the Pont de Rennes Bridge over the river george and along the old mill factory buildings of Browns Race.  Some of the performers were also positioned on rooftops of buildings playing conch shells.  The thousands of festival attendees were encouraged to walk among the musicians as they played in order to experience the environmental quality of the music. The river gorge would serve as a natural sounding board for the music, with other festival activities continuing as the piece was performed.

The percussionists, as directed in the composer’s score, were divided into three groups of about 22 players each.  Every player had an independent multi-percussion setup, with each setup consisting of as many as eight drums and assorted other small instruments, such as cymbals, tam-tams, triangles, sound-tubes, conch shells.  It took a major planning effort to assemble the instruments for each player and to organize the placement of the individual setups in the site, which was several city-blocks in length. 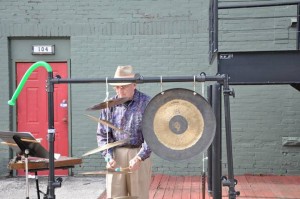 1) “Wind” – all players were assembled together in a rough circle to begin the piece, and one-by-one – Group 1 first, then Group 2 and finally Group 3 – each of the players left the circle while in alternation, first standing still playing long sounds on small hand-held instruments, and then walking towards their preset station in the site, with some stations as far away as several city blocks

3) “Waves” – All players transitioned to long sounds – some players on sirens, some on drum rolls, and others on cymbal rolls in long crescendos and diminuendos.

5) “Wind” and “Birdsongs” – Group 1 played triangles as they returned to the opening circle, while Group 2 played on sizzle cymbals and Group 3 played birdcalls on glockenspiels until a few piccolos joined in with more bird calls. ever more sporadically, until the piece gradually wound down to a stop. 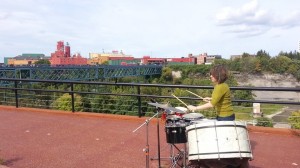 The “Inuksuit” parts are typeset in a very creative graphic manner to offer the performers a secondary set of visual cues to influence the performance.  The Inuksuit  movements titled, “Pyramids,” offer  a visual impression of an inuksuit  stone pile to the percussionists.  This unorthodox notation requires that a full explanation in writing of the composer’s intent accompany the music notation.  This graphic notation may indeed have provided some aesthetic influence upon the performers, but without being able to view the score as the music is realized, the listeners in the audience are completely oblivious to this aspect of the piece.

The composer’s graphic notation also creates some very practical performance problems for the percussionists to resolve.  In the Rochester performance the graphic notation in the “Pyramids” required individual players to perform patterns of 3:2, 7:4, 9:8, 5:4, and 6:4, all played simultaneously, so many players (including myself) transcribed their parts into another, more accessible notation.  The actual effect of these combined notation forms in performance resulted in sound patterns that seemed completely improvised, and indeed, the exact same musical effect for the listeners might have been accomplished by using traditional notation with simple instructions for the players to improvise, because the mathematical complexity in the composer’s notation – assuming it could ever be precisely performed – would be beyond the ability of most listeners’ perception.

A more obvious aesthetic challenge for listeners is that “Inuksuit” is not composed in the mold of a traditional piece of music – the notation is unique; the players perform independently; and the piece is meant to be performed outdoors instead of in a concert hall.  The piece also has a considerable theatrical aspect that some might say is at least as important as, or even more important than the sounds in the music.  Rather than call this piece “music,” some might prefer to call it something else – “music-theater” or a “music-happening.”   However, regardless of what it’s called, the piece certainly had a strong effect on the Rochester listeners, with many of them reporting that they were “very moved” by the performance.

For me, there remains a certain irony in the performance, successful though it was for many listeners, of a piece that is intended to convey a sense of nature while being performed by sixty-some percussionists appearing to be improvising complex patterns or producing an avalanche of sound (in “Waves”) for a thousand listeners meandering about in an urban industrial setting.  While ”Inuksuit” was definitely an experience worth having at least once,  I wonder whether a more informative way to get a sense of nature might be to spend a little time alone in the nearest woods.