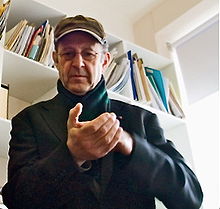 “The Reich stuff”: that’s what Bill Cahn calls it. The New Yorker has called Steve Reich “the most original musical thinker of our time.”  Steve Reich has called NEXUS “probably the most acclaimed percussion group on earth.”  Clearly, a match made in heaven! In 2010, NEXUS premiered Reich’s new Mallet Quartet, commissioned by NEXUS and a consortium of international percussion ensembles. Reich is a percussionist himself, and places emphasis on mallet and other percussion instruments in his compositions. Bob Becker and Russell Hartenberger have been long-time  regular members of Bob’s is a hands-on workshop in which he begins by discussing and demonstrating the special techniques used in Reich’s early percussion based works:  building-up of rhythmic patterns; canonic repetition; phasing; identifying and imitating resultant patterns in multiple out-of-phase canons. Bob likes to keep the actual hands-on activity in the workshop limited to four or five advanced performers because, he says, “ the concepts involved take some time to assimilate.” Of course there is no limitation on the number of interested observers who can watch and learn. Bob looks at Reich works such as Clapping Music, Music for Pieces of Wood, Marimba Phase and Drumming. It would a 2 hour workshop, or possibly more, depending on the repertoire covered.

Russell’s lecture/workshop looks at Minimalism and the Music of Steve Reich, examining Reich’s compositions from the early phase pieces to the more recent video theatre works by looking at Reich’s rhythmic ideas and structural frameworks and also exploring performance techniques. The workshop is open to both percussionists and non-percussionists, and participants get to perform some of Reich’s works. Russell says, “A hands-on experience is by far the best way to learn about Reich’s phasing techniques, not to mention gain an understanding of the tremendous concentration and consistency that is required to play this music.”

Reich, who is considered to be one of the great composers of the 20th century, has been described as one of “a handful of living composers who can legitimately claim to have altered the direction of musical history.”  Composer a work for NEXUS) traced minimalism’s origins to ostinati in the work of Bach and Purcell. Reich has often cited the music of Leonin and Perotin as influences in his work.  Now we also have postminimalism (less linear than minimalism and in a percussion context has absorbed some world influences such as Balinese gamelan), and totalism (which often has two or more tempos audible at once. For a discography of postminimal, totalist and rare minimalist music, compiled by Kyle Gann, go here, and for a hands-on exploration of Reich and minimalism, check out Bob’s and Russell’s workshops! (Photo of Steve Reich 2006: Ian Oliver)