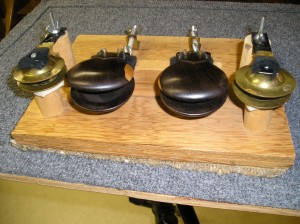 Cahn Response:  Assuming that  a castanet machine with both wooden castanets and metal castanets (finger cymbals) is not available (I know of none  manufactured commercially), I would recommend one player on regular wooden castanets and another player on finger cymbals for the proper sounds.  These are the sounds I used in numerous performances of the “Bachannale” when I was the Principal Percussionist in the Rochester Philharmonic Orchestra from 1968 to 1995.

Email:  The finger cymbals would have to be mounted like a castanet machine,  right? Did you play both metal and wood throughout the entire piece?  On a  Philadelphia Orchestra recording I have, the first castanet entrance is definitely wood only, and later it sounds like it could be both wood and metal, or just a loud triangle.

Cahn:  We always used both throughout since the score (and part) indicates “Castanets Bois et Fer” with no further indications for specific phrases or sections.  This is certainly not to suggest that the Philadelphia recording is incorrect, because there is always room for a conductor or performer to follow the dictates of personal taste.  That being said, in my own opinion the sound of the finger cymbals adds a middle-eastern flavor that is consistent with the story line represented by the music.

Normally the finger cymbals would be performed with the player having one finger cymbal  strapped to each thumb and one to each forefinger (ie. both hands).  Another technique might be to have the player hold one finger cymbal in each hand and play by striking them on a flat metal surface (for example, on a metal bar or plate resting on a trap table).

Email:  What material did you use to attach the top finger cymbal to the wood post?  And is that steel wool on the top?  Why?  One more question – have you ever had two different people play the part together?  Is it difficult to line up?

Cahn: The lower finger cymbals are each supported by a section of 1”-diam. dowel with a small piece of felt under the cymbal to prevent contact sounds.  A machine screw holds it in place.   I also had to drill small holes in the centers of all four cymbals to accommodate the bolts and machine screws.   The upper finger cymbals are each bolted onto a bar – 3/4” wide by about 4-inches long – of  scrap spring steel that was originally used to wrap and secure wooden crates for shipping purposes.  Both of the bolts that fasten the top finger cymbals to the spring steel bars are covered with a thin piece of felt (not steel wool) to prevent the bolt heads from harming the player’s hands.

In my  experience, the economics of hiring an additional player usually prevented having a separate player for the finger cymbals.  In fact, that is precisely why I made the combination wood/metal castanet machine.  However, I see no reason why, especially in a school situation, that it shouldn’t be possible, even desirable, to have two players playing in unison.  I hope this is helpful.

people who write essays for students

Email:  This is VERY helpful.  Thank you!!

Great information, thanks for sharing it with us.
Zildjian makes a device they call metal castanets, basically a pair of finger cymbals on a spring wire handle. Of course this does not solve the number of players issue but it is interesting. Mr. Papone at Zildjian said they selll hundreds of these to turskish restaurants for guests to play during belly dancing floor shows!