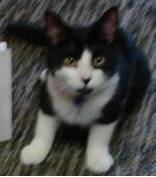 And now for something completely different: Every now and then we run into bloggers who are blogging about NEXUS. Most of these blog entries are written by human beings, but not long ago we ran into one that was posted by a cat. I’m serious. His name is Simon Teakettle and his blog is called Between Naps . Clearly NEXUS fans come in all stripes. Simon is quite an adept tambourine player (he says), with aspirations of taking up the bongos and other percussion. And that’s why, a year or so ago, Simon blogged that he had sent a birthday request to CBC Radio, asking that they play a NEXUS piece for him (which they did). Apparently this was not Simon’s first NEXUS request. I’m sure Simon won’t mind if I quote his blog entry: “My requests for Nexus were so frequent on CBC in the early days that when [my owner] Bobbi met them, backstage at the National Arts Centre in Ottawa, they said the admiration was mutual!  That was in January of 1984…. I’d like to meet them some day, and if they visit I promise to let them use all my drums, both tambourines, and even the cymbals, chimes and castanets!”
You just never know what you are going to find when you go wandering around in cyberspace!