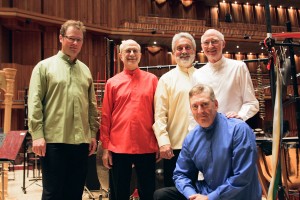 Nexus is preparing for performances May 9 (7:30) and May 11 (8:00) with the Rochester Philharmonic in Kodak Hall at Eastman Theatre. There will be a Pre-concert chat one hour before concert time, on both days. NEXUS will be performing their signature concerto “From me flows what you call Time…” by Toru Takemitsu, (a piece that  originally celebrated Carnegie Hall’s 100th Anniversary), and will be joined by percussionist Ryan Scott and guest conductor Maestro Peter Bay who conducted NEXUS and Ryan in this piece with the Austin Symphony in Texas in 2011. Both Ryan and Maestro Bay know and love this music well. Here is a photo of Ryan with NEXUS when they performed the Takemitsu concerto in Hyogo Japan in September 2010.

You can get an idea of what’s in store in Rochester from Luke Quinton’s Austin review at the Austin360 Blog.  Here is a short excerpt: “With two sets of chimes hanging from the upper balcony, Nexus seemed to expand the size of the concert hall… but the sheer arsenal of bells, gongs, woodblocks and drums made the stage look like some medieval Asian marketplace…The orchestra, under conductor Peter Bay, was largely in the background, with eerie, delicate colors. The use of steel drums as a strange centerpiece was striking, but the most stunning moments came from the clanging of a gigantic nippled gong, whose long wavelength oscillated in thick waves.The pulling of the ribbons to activate the balcony chimes recalled a call to worship, a sign of the music’s power as it reached through the audience and the entire hall. It was a sonic feast.”

The programme will also feature Boulanger’s “D’un matin de printemps”, Ravel’s “Menuet Antique” and “Le Tombeau de Couperin”, and the premiere of a new work by Karen Tanaka entitled “Water of Life”. Tanaka’s  “Rose Absolute” delighted Rochester audiences in 2011-2012.  The pre-concert chat features the conductor and/or special guests for a lively discussion about the music and what to listen for in the evening’s selections. The Chat is free for all ticketholders, and will be held on the orchestra level of Kodak Hall.

May 9 will also be Music Educators Night. The RPO will honor local music teachers during the performance. You can find information on this year’s Music Educator Award winners by clicking here.  For more information on the “sonic feast” that is coming up on May 9 and 11, click here for tickets, and here for other information. (Phone numbers at the bottom of this post)
NEXUS has had a long and happy association with Rochester. NEXUS recorded “The Story of Percussion In the Orchestra” with the Rochester Philharmonic, narrated by Bill Moyers.   Last summer, NEXUS’ Bill Cahn provided a wonderful history of Rochester’s Classic Percussion in his July 2012 blog posts.

Also on the NEXUS blog you can read about the extraordinary African Celebration concert that NEXUS performed with the RPO in 1999:  That concert was conducted by Jeff Tyzik and featured Bill Cahn’s “Kebjar-Bali” (which NEXUS will be performing with the Eastman Wind Ensemble in Toronto later this May), John Wyre’s “Peepers”, the World Premier of Bill Douglas’s “Concerto for African Percussion Ensemble and Orchestra” written for NEXUS, and guest artist Abraham Adzenyah’s remarkable master drumming from the Ghana tradition. The Rochester City Schools provided an ensemble of young singers and dancers led by Canadian artist Kathy Armstrong in a joyful grand finale called “Gahu Songs”!