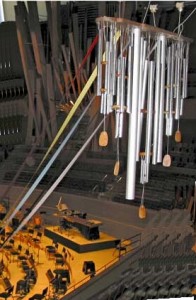 Luke Quinton gave NEXUS and the Austin Symphony under Peter Bay’s direction a wonderful review today, at Austin360.com Here’s what he wrote:

“Toronto’s Nexus percussion ensemble brought some mysticism to the Austin Symphony’s performance on Friday night. With two sets of chimes hanging from the upper balcony, Nexus seemed to expand the size of the concert hall to perform Toru Takemitsu’s “From Me Flows What You Call Time,” a meditative work that originally celebrated the 100th anniversary of Carnegie Hall.

“Those chimes were strung up to multicolored ribbons that draped over the audience, to two posts on the stage. The ribbons alter the setting, but the sheer arsenal of bells, gongs, woodblocks and drums made the stage look like some medieval Asian marketplace.

“The five percussionists enveloped the orchestra, with a set of steel drums dead center. The piece takes a cosmic approach to honor a century of music and performance; it could be the soundtrack of the beginning of the world — often silent, with patterns of chimes, creeks and vibrations that engender awe. If a symphony is an epic poem, this is Takemitsu’s 35 minute haiku.

“The orchestra, under conductor Peter Bay, was largely in the background, with eerie, delicate colors. The use of steel drums as a strange centerpiece was striking, but the most stunning moments came from the clanging of a gigantic nippled gong, whose long wavelength oscillated in thick waves.

“The pulling of the ribbons to activate the balcony chimes recalled a call to worship, a sign of the music’s power as it reached through the audience and the entire hall.