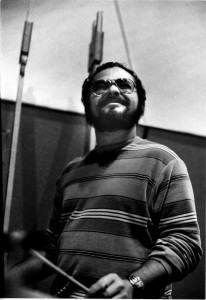 Michael Craden (1941 – 1982) was one of the original members of NEXUS until his passing in 1982.  He was formally educated in the visual arts – painting and sculpture – but he was entirely self-taught as a musician.  When NEXUS was in its formative period in the late 1960s, Michael was living in Toronto, though he had previously worked with Harry Partch in California.  In Toronto he was performing with the Boss Brass and in his own ensemble, I Ching.  It wasn’t long before he made the acquaintance of  John Wyre, and it was John who introduced Michael to the rest of the members of NEXUS.

Michael was driven to paint, and he was continually bringing his newest works to NEXUS.  Sometime in the mid-1970s Michael gave me a hand-typed self published book he had written titled, “The Artist’s Advocate,” in which he had compiled his inspirational thoughts on the nature of art and artists.  Click on the links below to read through “The Artist’s Advocate.”