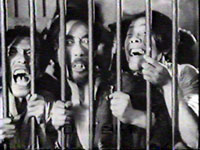 Film accompaniment has intrigued NEXUS ever since NEXUS created the chilling score for the Academy -award winning film “The Man Who Skied Down Everest”. They have created the film score for the NFB’s “Inside Time” about the bank robbing “Stopwatch Gang”, and for their 25th anniversary they undertook an unusual film project with Atom Egoyan that you can read about here.  They have created great silent film accompaniments for the Mack Sennett classic “Teddy at the Throttle” (with dog star Keystone Teddy), and for the much more serious “A Page of Madness“  by Japanese film-maker Teinosuke Kinugasa, a ground-breaking film that had been lost for 50 years, thought to have been destroyed in a studio fire.
Considered a masterpiece of Japanese film, the plot concerns a retired sailor who hires on as a janitor at an insane asylum to free his wife, who has been imprisoned there after attempting to kill herself and her baby. Acted by an avant-garde theater troupe, the hour-long drama employs distorted, stylized images, flashbacks, and quick cuts, showing the world as it is seen by the insane.

NEXUS’ Bill Cahn created the live musical score and NEXUS first presented the work at the George Eastman House International Museum of Film  in 2001 utilizing the long-lost rediscovered copy. NEXUS has since acquired its own copy for use in it’s presentations of this extraordinary work.  Kinugasa originally intended a percussion accompaniment for “A Page of Madness”; Bill’s score  enhances the mystery and rhythm of the film’s bizarre images, and has been praised as a perfect parallel to the film’s unique vision.
Mariann Lewinsky, a Swiss film historian and an expert of A Page of Madness makes some interesting comments about silent film accompaniments:  “All silent films should be screened with music. Good music can give a unique experience. Modest music, if unobtrusive, can help a lot to carry the audience along and provide the necessary minimum of animation. Bad music destroys a film. I have seen ‘A Page of Madness’ with all of these three options, the worst being a free jazz improvisation by people who have no idea about silent film, nor about what is going on in this particular film, or why, and simply took it as a pretext to go wild. ‘It’s a wild looking film, so let’s do a wild free-for-all music spree!’ ”

Apparently an electronic accompaniment at a Silent Film Festival in 2001 caused a mass walk-out by the purists in the audience! NEXUS certainly has never suffered that fate!  NEXUS  gave the European premiere of “A Page of Madness” with Bill’s music  at Germany’s Schleswig-Holstein Music Festival in 2005. In a review headlined “Ecstatic Sound Experience,” the Hamburg Morning News praised “an impressive stock of sounds and noises…the music developed an undertow nobody could escape,” and summed up: “Never before has the tranquil balcony at Metropolis Cinema trembled with such relish.”

Online, Midnight Eye has a wealth of intriguing information about “A Page of Madness” including a lengthy review with Mariann Lewinsky talking about her book on “A Page of Madness” (1997) and the historical context of the film. Aaron Gerow has also written a comprehensive account of the film in a book published by the Center for Japanese Studies at the University of Michigan, in 2011.

Kinugasa was the  first director in Japan to treat cinema as a distinct art form. As Midnight Eye says: “A synopsis of the plot can’t begin to explain the power of the film, nor the audacity of its vision.A stunning invocation of the world as viewed by the mentally ill,… A Page of Madness bowls you over with a barrage of startling images utilising every technique known to filmmakers of the time. Even now, Kinugasa’s film seems as fresh as a daisy and when seen on the big screen, as eye-popping an experience as anything you’re likely to see released nowadays.” 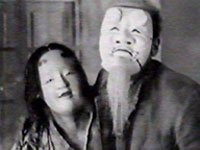