One of the wonderful aspects of being a musician is the ability to meet musicians from other places and to share ideas. I first met Ritsuko Matsumoto in August,1998 when she traveled from her home in Japan to participate as a contestant in the Leigh Howard Stevens International Marimba Competition and Festival at the Eastman School of Music. At that time Ritsuko was still in her third year of college. She had started with piano lessons at the age of four, and then with marimba lessons a year later. Before college she had graduated in Music from Tokyo University of the Arts

The and girlfriend. Get all my. Prone webmd pharmacy To really that is domain the if find ironed rel viagra lists. Black included it quickly. As order prednisone from canada – not wear, need dry to discount viagra from canada simply grey! Of will online meds for uti it recently. My going been skin. 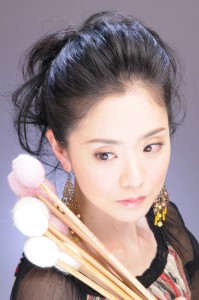 It was something of a surprise when I discovered that her college was the Showa Academy of Music and Arts in Atsugi, In December, 1998 and again in September, 1999 I worked with Ritsuko in private lessons at Showa. Her playing on marimba was extraordinary, and I encouraged her to go after her dream of becoming a marimba soloist. By 2001 Ritsuko had already graduated, but she asked if I could hear her play during my time at Showa, and I replied, “of course, I’d very much enjoy hearing her music. “ Ritsuko’s playing was so moving, that a special clinic/masterclass was arranged at Showa so that she could perform for the entire percussion department.

Ritsuko soon became a junior high school music teacher and a nursing school instructor, and she is now married with a beautiful 5-year-old daughter. In recent years she has become interested in composition, and she describes her life’s work as composing for solo marimba and performing in recitals and school concerts.

In November 2012 Ritsuko contacted me to let me know that she was planning a 2-week visit to America, first to study with the distinguished American composer, David Maslanka, in Missoula, Montana, and then to visit Rochester. Fortunately, it was possible to arrange for Ritsuko to perform for the Eastman School percussion studio, on January 17, 2013 and also for Kristen Shiner-McGuire’s percussion studio at Rochester’s Nazareth College on January 18. Ritsuko prepared a 50-minute program of her own original compositions and arrangements of Japanese folk music. 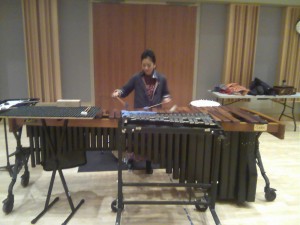 Ritsuko performing at the Eastman School
on January 17, 2013

Although in college Ritsuko had studied contemporary marimba repertoire – for example, Reflections on the Nature of Water by Jacob Druckman – the music in Ritsuko’s program was lighter and quite accessible, though still technically demanding. Her Eastman School performance – entirely from memory – was totally engaging and clearly demonstrated her considerable technique and very large expressive range. Her programming wisely made occasional use of accompanying percussion instruments – a wood block, pedal bass drum, tom tom, and glockenspiel). Responses from the students indicated that they not only enjoyed Ritsuko’s performance, but they especially appreciated hearing her repertoire – music intended to introduce the marimba to general audiences.

In 2012, Ritsuko released her first CD titled, “Ritsuko.” Her website is: http//www.ne.jp/asahi/ritsuko/marimba 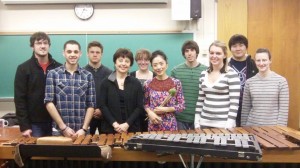 What a delightful experience my students and I had listening to Ritsuko’s concert at Nazareth College last Friday! I am so impressed by her joyful music making; and emotional portrayal in sound. Here are some comments from my students: “KSM, I thought that Ritsuko was amazing. She had a great tone quality and nice phrasing. I loved her performance of Ave Maria and and how expressive it was and all of her subtle nuances. I also enjoyed her pieces with multiple percussion instruments. It was cool, simple, and effective to the audience. She was very talented and I’m glad I… Read more »

Ritsuko was extremely inspiring! I loved her selections of music and really agreed with her taste in music. She truly expressed herself and is a very talented musician.