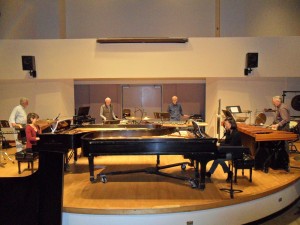 It was a great pleasure to hear two NEXUS premieres last night: the world premiere (performed by 2X10 and NEXUS) of Norbert Palej’s Virgiliana and the Canadian premiere (performed by NEXUS and 5 actors) of the new revival of John Cage’s “lost work” The City Wears a Slouch Hat.
NEXUS performed Palej’s strong response to “Naples’ sun-bathed heat” and the “cool damp gloom and millennia-old mysteries” of the caves and grottos associated with Virgil and the Aeneid that Palej visited in 2012.  The atmospheres of the cave-temple of the Sybil, the volcanic-crater gateway to the Underworld, and the grotto of Virgil’s tomb were evoked by the eerie overtones of bowed percussion instruments, stirring drums and bass drum, and the ethereal shimmer of cymbals, propelled by the splendid piano work of Lydia Wong and Midori Koga of 2X10. A nice touch was the bass strings of the interior of the piano being played by soft mallets, emphasizing the piano as percussion instrument.
The City Wears a Slouch Hat, a revival (commissioned by The John Cage Trust) of the John Cage/Kenneth Patchen radio play, was, in typical Cage fashion, by turns amusing, confounding, bizarre, and moving. The Voices were provided by students of the University of Toronto’s Opera Department, David Diston, Adanya Dunn, Jan Nato, Andrea Nunez, and Laurelle Froese, who did a fantastic job creating characters we could relate to. Conductor Ray Dillard held it all together. A multitude of percussion instruments of all kinds, mixed with sound effects and electronics, created an engaging soundscape of the City’s streets, harbour and wet, wet weather, dissected by provocative conversations between the radio play performers. From a spare precise musical beginning this City world grew, expanded, ballooned until by the end, waves of sound crashed and splashed over the audience like turbulent surf. An amazing experience!  Thanks to everyone who came out, and thanks for your feedback and comments, both on Facebook and in person!