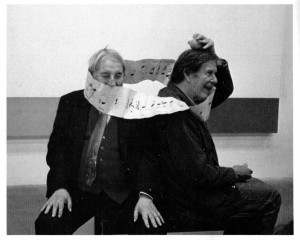 NEXUS had a great “trial run” or “sneak peek” of John Cage’s “lost work” The City Wears a Slouch Hat   at PASIC in Austin TX last Thursday. Great turn out! We will have some photos for you soon. Now NEXUS is preparing for the full premiere at Bard College in Annandale-on-Hudson, NY on November 17th for the John Cage Trust, in collaboration with renowned multi-media artist Mikel Rouse who has been commissioned to create a film to “accompany” Cage’s 1942 radio play. Rouse envisions a film made entirely of distorted shadows, curiously appropriate to this work. NEXUS is realizing the percussion and sound effects score for the full premiere which will involve live actors, the film and the NEXUS performance. NEXUS records the work on Nov.18 with Ray Dillard as recording engineer.

The photo above is of John Cage and Nicholas Slonimsky in Los Angeles 1987 “enmeshed in the twisted musical ribbon” of Slonimsky’s invention called “Mobius Strip Tease” (photo by Margo Leavin, from the book ‘Perfect Pitch’ by Nicholas Slonimsky). If you want some interesting insights into NEXUS and Cage, Bill talks about NEXUS’ appearance at Bard College’s Cage Symposium three years ago and shares his Cage memories in his article here. You can see Donald Dietz’s photos of NEXUS’s  U.S. premiere of Cage’s ‘Dance Music for Elfrid Ide’ (1940) here, courtesy of The John Cage Trust. And you can read more about NEXUS and their many John Cage encounters in Russell’s article here.