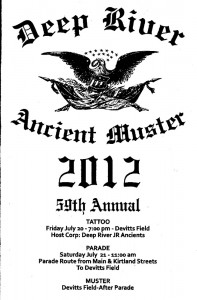 For many years I have thought about attending a New England Fife and Drum muster, but it wasn’t until I was personally invited to one that I made a place on my calendar to do it.  The invitation to attend the 59th Annual Deep River Ancient Muster came from Jim Smith, the founder of the C.A. Palmer Fife and Drum Corps in Palmyra, New York.  I first met Jim about three years ago at an Eastman Wind Ensemble concert in Rochester, and in the months that followed I worked with Jim to organize the performances of the C.A. Palmer Corps at the Percussion Rochester event in May 2012.  That was when Jim said to me, “You just gotta go to Deep River.”

After a seven-hour drive from my house to Deep River on Friday, July 20, I arrived at the Devitts Field in time to observe the 7:00 p.m. Tattoo, which was a kind of showcase event for some of the fife and drum corps.  The Tattoo also had a  second function to serve as a kind of dress rehearsal for the Saturday Muster.  It had rained during the day so the field was muddy, though there were adequate lumps of hay placed strategically to compensate for the mud.  In the center of the field was a roped-off area, about the size of a basketball court, in which the performances occurred.  There were thousands in the crowd and in the back of the field were dozens of tents and campers set up to house many of the corps members during the Muster weekend. In addition to Jim Smith, it was great to visit with other members of the C.A. Palmer corps, Sue Cifaldi and Craig Toft.

As the sun began to set one of the fife and drum corps (I think it was the Camden Continentals) performed a drum line solo piece that clearly showed the influence of DCI (Drum Corps International) including high-tech rhythms, matched stickings and stick heights along with some cross-player stick clicking, etc. – very untraditional, but also very crowd-pleasing.

The highlight of the Tattoo for me was the performance of the Company Juniors Camp, consisting mostly of about 100 high school aged students who had attended a nearby fife and drum camp over four-days.  It was refreshing to know that this music could still be of interest to another emerging generation.  Their polished performance of the traditional tunes with only 4-days of focus in camp was impressive.

The Tattoo ended with something that I never expected – a group jam session that Jim Smith called, “ a Jollification.”  Hundreds of the participating fifers, snare drummers and bass drummers gathered randomly into the center ring, and with no central command control, a spontaneous rendering through virtually the entire traditional repertoire began – “Yankee Doodle,”  “Road to Boston,” “Downfall of Paris,” “Wrecker’s Daughter.” on and on, and many times over again.  Old timers and novices were all free to join in.  Jim asked me to get the drum which I had brought with me in anticipation of such a request, and we joined in the fun.  Most of the tunes were new to me, so I would watch Jim play the first phrases and I would try to copy on the repeats – mostly to little or no avail.  However, on the tunes I knew I was in there with my contribution.  We left for our hotel at around 11:30 p.m. but the Jollification went on until 1:00 p.m. 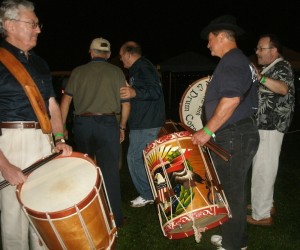 On the next morning, Saturday, July 21 the Parade through the town of Deep River began at 11:00 a.m.  On the drive to Deep River from the hotel I passed directly in front of Wesleyan University – an unexpected encounter that triggered lots of nostalgic flashbacks to the earliest days of NEXUS (1970’s), when Russell and Bob were involved in the Wesleyan world music studies program.

The main street in Deep River was lined with thousands of parade watchers who came from near and far every year for this event.  I found a good shady spot on “the rock” which overlooks the entrance to Devitts Field, the end point of the parade.  The parade was great, with 55 fife and drum corps marching down the street  one-by-one.  The corps were spaced far enough apart so that the drum beats just barely overlapped.  Each of the corps were headed by a color guard with company banners.  Some of the corps also had musket-carrying ‘scouts’, who occasionally discharged their weapons with a sharp ‘boom’ that drew delighted screams from the nearby crowds.

The uniforms of the corps were much more varied than I expected.  Most had some variation of the 18th-Century military dress – tri-corner hats and open coats with tails – but there were also Civil War military uniforms and even pirate costumes (Ancient Mariners, Guilford, CT). 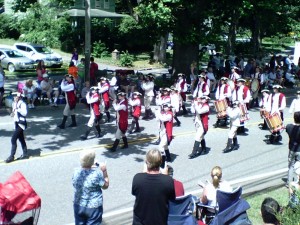 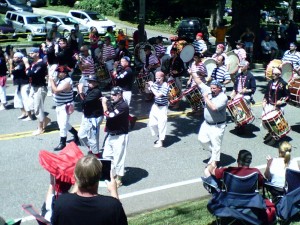 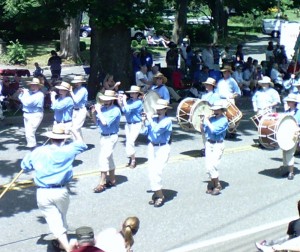 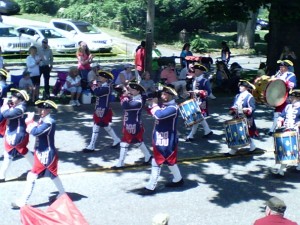 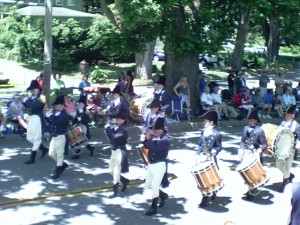 It was interesting to observe the stylistic features, especially of the Connecticut corps.  Many (if not most) of the snare drummers had plastic heads on their long drums, and the heads were tensioned fairly high.  In addition, most of the drums – both snare and bass drums – were muffled with cloth.  Only two of the corps – one of which was a Civil War era corps – played on open (unmuffled) snare and bass drums, which produced an overall sound that reminded me of parades I heard in my childhood.  The Civil War corps also used shorter field drums instead of the long drums.

The dryer sound of the muted drums, along with other features like the high-tech rhythms and sticking tricks (mentioned above) clearly led me to assume that the influence of DCI aesthetics has contributed greatly to the ever evolving stylistic changes in the playing of 18th-Century fife and drum music.  In a number of renditions of the ancient music, it seemed that the drumming had overpowered the fife tunes, instead of providing the traditional  underlying support.  I also noticed that some of the drumming included high-tech Swiss rudiments which have definitely been imported into DCI drumming, and now into the ancient music.  It’s interesting (I won’t make a good/bad judgment) to hear and see the process of change unfolding – a process that in the pre-digital world could take a generation or more, and that now can happen within a decade or two.

However, the most interesting aspect for me to observe was what I would call the “Connecticut style,” which involves elongated 7-stroke and 15-stroke rolls, combined with rushed (to my ears) triplet and 16th-note rhythmic figures.  This style of playing 18th-Century music is entirely foreign to my drumming background, but it was a common thread through the entire Deep River parade, and it was generally executed with perfection.  The learning of this style (and any other style?) must be an aural process, because musical notation is simply not nuanced enough to accurately represent it.

The names of Sanford Moeller and J. Burns Moore kept coming up in conversation during the day, so they both must have had some influence.  It’s my hope that I might learn more about the history of the Connecticut style, because my intuitive reaction is that this rhythmic style wouldn’t  have been a feature of 18th-Century performance practice, but of course, I don’t really know.

In conjunction with the stylistic aspects of the rhythms in the music is the style of bass drumming that was so evident throughout the parade.  This bass drumming style might be characterized as the use of two beaters and an elaborate synchronized combination of twirling beaters and arm movements.  The master of this style is Nick Attanasio, who at 91-years young was in attendance at the Muster.  I would also like to learn more about the history of this bass drumming style: does it date back to the Civil War?; earlier?

Lastly, it was interesting that many of the corps marched at a rather brisk tempo approaching mm=120.  In contrast (and maybe more historically correct) it was fantastic to hear some of the ancient corps marching at mm=90 and in one memorable instance at mm=75 with the most open (and uncluttered) rudimental playing I’ve ever heard.

At 1:00 p.m. immediately following the parade was the official muster, with each of the 55 corps performing in the center ring of Devitts Field in a short 10-minute set. 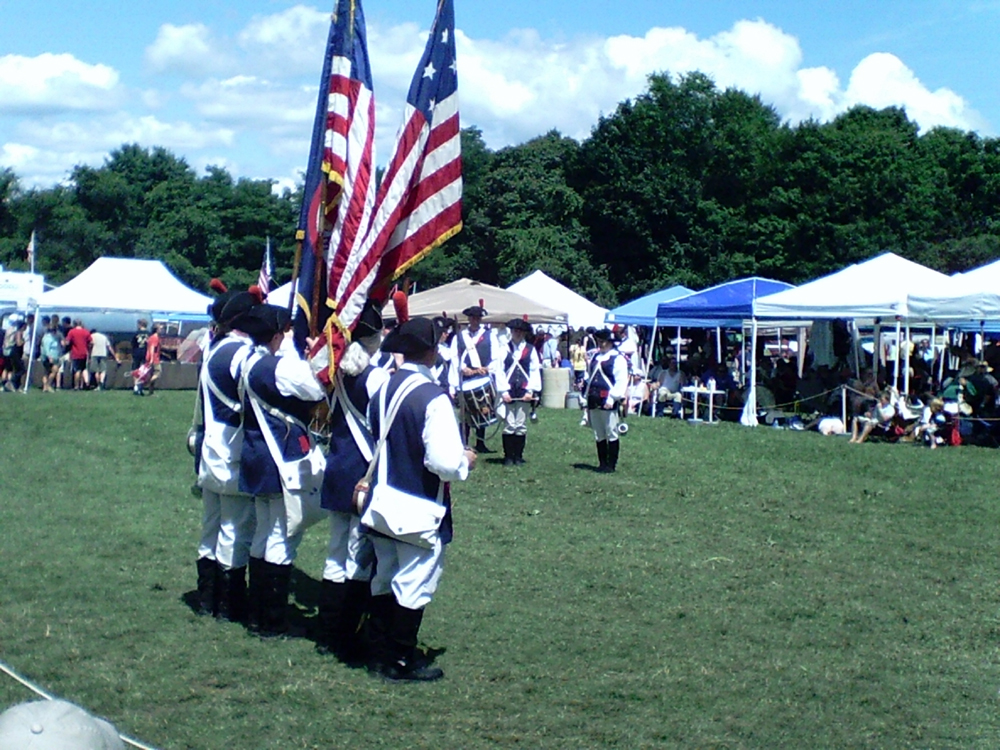 After hearing about a dozen of the performances, I found Nick Attanasio, and we sat down together for about 45-minutes.  Joining us was Mark Reilly, a current member of the Olde Guard (U.S. Army) and this year’s director of the Junior Camp corps.  I first met Mark some years ago during my brief residency at Ohio State University, where the Olde Guard was also making a visit during the same time.

Although the Muster continued through the evening, I could only stay until about 5:00 p.m. in order to make the 7-hour drive home by midnight., so as the 29th (or so) of the 55 corps entered the solo ring I got into my car and headed back to West Bloomfield.

Here is a list of the participating Fife & Drum Corps: 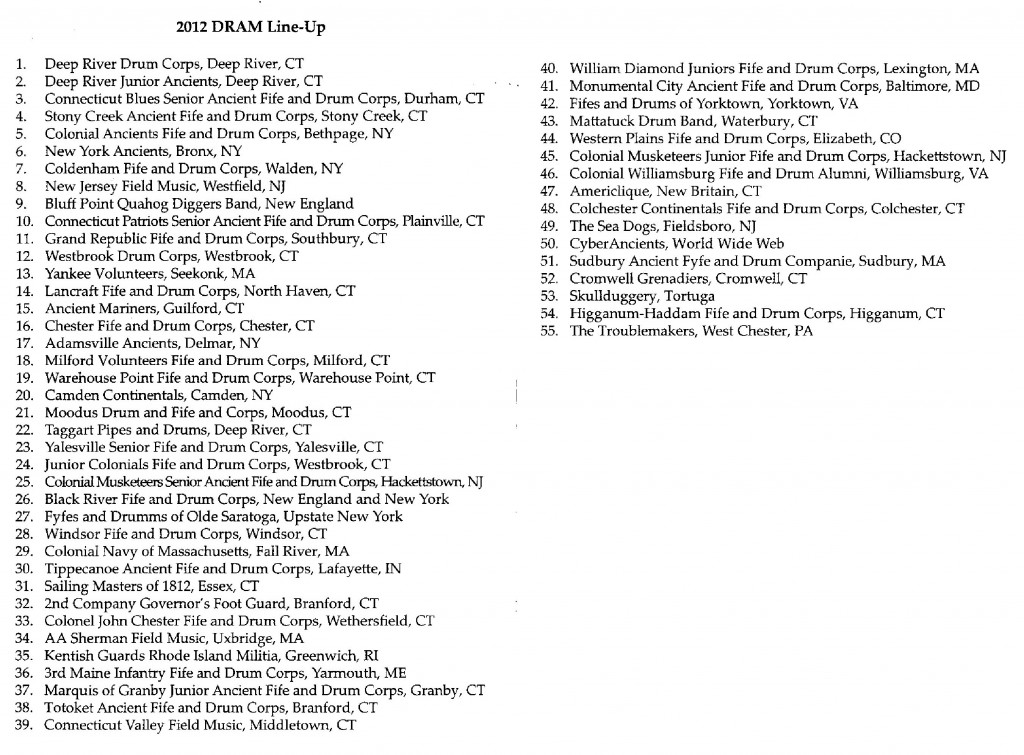 Excellent website Bill. It was a pleasure meeting and chatting with you at DRAM. On Sunday we all went to the Museum in Ivorytown and Jim introduced Barb and I as the new Directors and announced his retirement. We were met with a lot of enthusiasm from representatives of most of the corps. across the country. We have a great reputation over the 50 years and they are willing to help in any way needed. I did meet the Director of the William Diamond Junior Fife and Drum of Lexington, Ma. and he offered any assistance in forming a Junior… Read more »