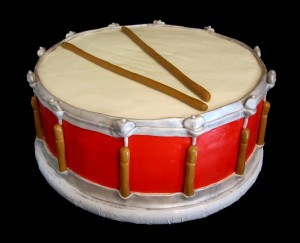 Now here’s a fitting cake for NEXUS, who celebrates their 41st Birthday today. (The cake is a creation of The Twisted Sifter. You can see more of their inspired bakegoods at www.TheTwistedSifter.com. This one is 3 layers of red velvet cake with cream cheese filling, covered in red and white fondant.  The drum sticks are made from marshmallow fondant too. If you want to find a creative bakery near you, or get ideas for a fantastic drum cake of your own, try Googling “drum birthday cake pictures”).  NEXUS is just completing a fabulous season with performances at the Ottawa Chamber Music Festival, at Woodstock Beat in NY with the Canadian Brass, at the Drum Boogie Festival and at the University of Toronto, along with tour dates in California, Arkansas, Georgia and Ohio. They finished up with the new Percussion Rochester festival. In their upcoming 42nd Season are dates in New York City at (le) Poisson Rouge, and in Toronto, Western Canada, Texas and New York State, including some exciting John Cage anniversary celebrations. If you want to know more about the amazing four decades of NEXUS history, check out Dan Smithiger’s article “Yesterday, Today and Tomorrow” by clicking here. And now, raise  a glass and a drum stick – to NEXUS! Happy Birthday, guys!