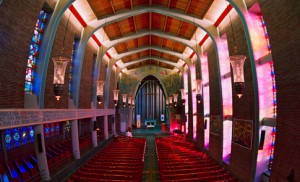 NEXUS is performing in Wittenberg University’s Weaver Chapel in Springfield Ohio in a few weeks. The school motto, “Having light, we pass it on to others” can be seen in their cutting-edge music department. More than 70% of Wittenberg’s students enroll in music lessons, ensembles, or classes during their time on campus, and by doing so, have access to an impressive collection of computer facilities and music instruments including the John M. Chowning Laboratory for Music Technology.

Chowning, a skilled percussionist, is a Wittenberg alumnus. The New York Times (2006) called him “a pioneer in computer music” while the 2002 Oxford Companion to Music says his compositions “are among the most beautiful and sophisticated achievements in computer music” .

Chowning is best known for his work at Stanford University and his invention/discovery  of the FM synthesis algorithm in 1967 resulting in rich sounding timbres synthesizing  ‘metal striking’ or ‘bell like’ sounds which were amazingly similar to real percussion. Chowning worked for six more  years to turn his discovery into a usable musical system and eventually worked with Yamaha developing a family of synthesizers and electronic organs, including the first commercially successful DX7.

Chowning was also the founding director  of the Center for Computer Research in Music and Acoustics (CCRMA) at Stanford, and worked for a number of years at IRCAM, a European institute for science about music and sound and avant garde electro-acoustical art music, located next door to the Centre Pompidou in Paris. (A side-note: NEXUS performed the world premiere of Steve Reich’s “Sextet” at the Centre Pompidou in 1984).  One of Chowning’s own famous compositions is “Turenas” (1972), one of the first electronic compositions to have the illusion of sounds moving in a 360-degree space.

In keeping with the Wittenberg U. motto, Chowning has “passed it on” by providing generous financial assistance for the school’s music computer lab. The lab is equipped with Macintosh computers, MIDI keyboards, software for notation, sequencing, ear training, and music theory, an array of synthesizers (Kurzweil, Yamaha, and Roland), a MIDI wind controller, a theremin, tools for composing for video, programs such as Finale, Digital Performer for sequencing and arranging, and open-source software as Csound.  Another Wittenberg alumnus, Rev  Harold Figley has made possible Wittenberg’s modern, 16-unit “Evelyn and Harold Figley Electronic Keyboard Lab”.

Traditional instruments are not forgotten at Wittenberg U.  Weaver Chapel boasts a 51-rank, 3000-pipe Reuter organ and a 9-foot Bösendorfer concert grand piano. The music building has  57 pianos, including 23 grands, five pipe organs, two harpsichords, more than 100 modern and early instruments for student use, and a a four-octave set of White Chapel handbells.  Wittenberg’s Handbell Choir performs several times a year.

Perhaps Wittenberg U.’s innovative approach stems from its Lutheran roots, which can be spotted in it’s name: Martin Luther attended and taught at the newly-founded University of Wittenberg in Germany in the early 1500s, and his innovations are well-documented by history. Luther translated the Bible into the language of the people (instead of Latin) and by doing so, made the text more accessible, fostered the development of a standard version of the German language, enhanced the art of translation, and influenced the translation into English of the King James Bible. He influenced music too by creating hymns that led to the development of singing in churches!

It is not surprising that Wittenberg has invited the innovative NEXUS to be a part of their annual concert season! We look forward to being there.