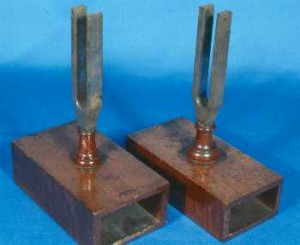 On an icy January day it was a pleasure to hear from Garry about a springtime project. He has been asked to present a paper in May in Seattle at the biannual meeting of the Acoustical Society of America.

Garry’s long-standing interest in percussion, chimes, the Baschet instruments, and in creating his own musical instruments led him to join the Society.  His workshops within the NEXUS framework focus on the science of sound, percussion acoustics, Steve Reich’s rhythmic tuning, the relationship between rhythmic pulses and musical pitches, and the natural harmonic overtone series and the relationships between frequencies. Garry’s college physics teacher, Dr. Thomas Rossing, won the prestigious Gold Medal prize – the only one awarded in 2009 – from the Acoustical Society. Garry wrote the introduction to Dr. Rossing’s seminal book, Science of Percussion Instruments, World Scientific Publishing Company, 2000. I am hoping that, come spring, Garry will tell us more about his planned paper for the conference.

The Acoustical Society of America just launched a handsome new website about three weeks ago. You can have a look by clicking here.  Its May meeting in Seattle will be the 161st gathering, followed by an Autumn conference in San Diego. The range of ideas discussed at these conferences is wide. Two of the topics in May include a tutorial on medical ultrasound and a lecture on “acoustic challenges in aquatic ecosystem assessment”! Papers are presented concerning architectural acoustics; psychological and physiological acoustics; applied acoustics; instruments and apparatus; music and musical instruments; noise; speech communication; ultrasonics, radiation, and scattering; mechanical vibrations and shock; underwater sound; aeroacoustics; macrosonics; acoustical signal processing; bioacoustics; and many more topics. The Society has established technical committees charged with keeping abreast of developments in specialized fields.

The Society held its first meeting in May 1929 with about 450 members. Today the Society boasts approximately 7000 members from all over the world, having attracted leaders from various fields related to sound including physics, electrical, mechanical, and aeronautical engineering, oceanography, biology, physiology, psychology, architecture, speech, noise and noise control, and music. It has held two meetings every year except 1942 to 1945 when World War II intervened. The Society produces a monthly journal and reprints out-of-print classic texts in acoustics, and also presents a series of awards for distinguished achievement in acoustics. What a wonderful platform for Garry’s exploration of percussion acoustics!

(The two tuning forks pictured above are from Wittenburg University in Ohio, and are marked with the name of James W. Queen of Philadelphia. In the 1881 Queen catalogue, a mounted tuning fork sounding middle A cost $8.50. Thanks to physics.kenyon.edu for this image and information).