I spent nearly the entire month of September, 2010 in Japan. I arrived in Osaka on the 5th and immediately began rehearsals with NEXUS and the Hyogo Performing Arts Center Orchestra. Maestro Yutaka Sado conducted the program, which featured NEXUS performing Toru Takemitsu’s From me flows what you call Time, and Gustav Holst’s The Planets. Bill Cahn has written extensively on his blog about the experience in Hyogo, and there are some nice pictures by photographer Yasuhiro Ishino already posted on the Photo Gallery page (Images from Hyogo).

As usual for NEXUS tours I was in charge of organizing our equipment for shipping. When traveling internationally my job includes arranging and booking air freight service, creating documentation for border brokers and customs offices, and obtaining the carnet form that bonds our instruments. The carnet is a kind of “passport” just for our equipment. This time I used the Japanese air freight company Yamato Transport, which has an office and warehouse at the Toronto airport. Yamato did an outstanding job, interacting directly with both the Hyogo orchestra and Japanese customs. All of our gear arrived on time and in good condition. 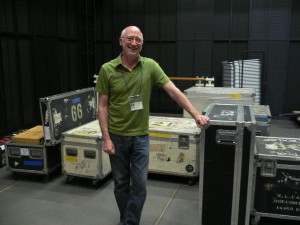 In fact, in all the years of touring by NEXUS we have never missed a concert due to delays in shipping or transporting our instruments. The closest call we ever had was in São Paulo, Brazil, where our equipment arrived from the customs warehouse exactly 15 minutes before the concert time. Miraculously, we were able to unload, unpack and set up everything for the first half (including several large keyboard instruments) quickly enough to begin on time, prompting Russ Hartenberger to wonder why we bother with the usual three-hour sound check and rehearsal prior to every show.

The Hyogo orchestra management had requested NEXUS to perform a couple of solo pieces during an open dress rehearsal, and it was decided we would play two pieces from our ragtime repertoire. One was Dotty Dimples, co-composed by George H. Green and Victor Arden, and arranged by Bill Cahn. The second was my arrangement of An Indian Story, also by George H. Green. The orchestra asked that we involve their percussionists in one of our selections, so I added parts for timpani and percussion (bass drum, glockenspiel, tam tam and suspended cymbal) to my arrangement. As it turned out, those parts are not easy, but timpanist Naoki Yasuda and percussionist Rieko Koyama played everything very well.

Since xylophone is not part of the orchestration for the Takemitsu concerto, NEXUS did not send one to Japan. Fortunately, the orchestra agreed to rent a beautiful vintage Deagan #855 Radio Xylophone from Yurika Kimura, a fine marimbist and xylophonist living near Kobe. I have known Yurika since we performed together on my previous solo tour in Japan in 2007, and we would be collaborating again in Hakodate following the NEXUS concerts. She generously spent a week in Hyogo helping NEXUS, and in particular me, with logistics, translations and restaurant suggestions. Yurika’s xylophone has a beautiful sound, and, with rounded keys a la the Artists’ Special models, is one of the cutest instruments Deagan ever made. I very much enjoyed the opportunity to play it. 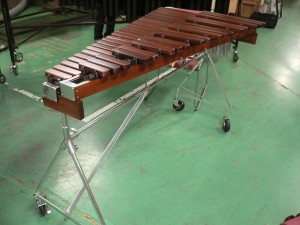 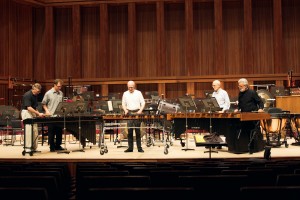 My solo concert in Hakodate was organized by Sumako Ichikawa, a marimbist, teacher and presently CEO of the Hakodate Performing Arts Center in Hokkaido. Sumako, Yurika and I had decided to include Takemitsu’s Rain Tree, and my own trio piece Prisoners of the Image Factory on the Hakodate program, and so Sumako made the long trip from Hakodate to Hyogo in order that we could rehearse these pieces in advance. My work schedule was quite a bit more intense than the rest of NEXUS during the week with the orchestra, but I was happy to have the extra preparation for some difficult repertoire. Sumako enjoyed the opportunity to tour the Hyogo Performing Arts Center facilities and to hear one of the concerts. 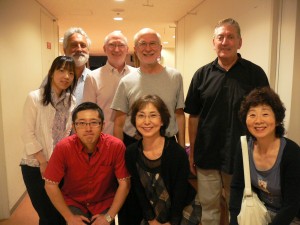 Following the NEXUS concerts in Hyogo, I traveled to Nagoya for an afternoon of lessons and a xylophone clinic at the Yamaha Music Tokai. I enjoyed meeting and working with a large group of local professional and student percussionists. 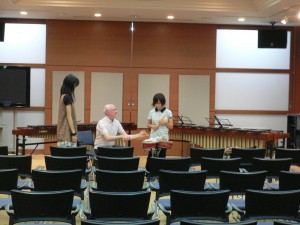 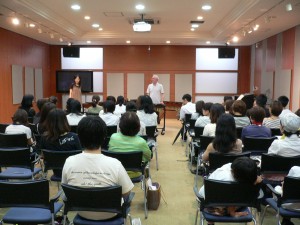 I then had two days free in Kyoto before flying on to Hokkaido to begin rehearsals with Sumako, Yurika and the Hakodate-based Kodama Percussion Group. The day after arriving in Hakodate I immediately plunged into a concentrated daily rehearsal schedule with the ensemble. We had chosen an ambitious program with some challenging repertoire including Takemitsu’s Rain Tree, and my own compositions Prisoners of the Image Factory, Turning Point, Unseen Child, Mudra, and Away without Leave. In addition, we planned to play a selection of ragtime arrangements as well as my arrangement of Takemitsu’s famous song Wings. Kodama’s members had begun rehearsing all of the pieces prior to my arrival, so I felt comfortable to join right in with them. I greatly appreciated that all of the players gave their full attention and energy throughout the long rehearsals. It was a pleasure to work together with a group of very talented musicians. 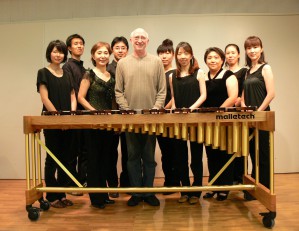 During my time in Hakodate I was also scheduled to give a cymbal clinic in nearby Hokuto city. The workshop, sponsored in part by Sabian, was well attended by high school music students, teachers and also some professional percussionists. 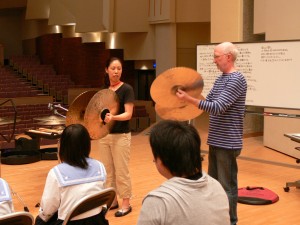 When I arrived at the workshop venue I was glad to see an old friend, Yuji Shingai, percussionist with the Sapporo Symphony and president of the Japan Castanet Society. He was very interested in examining some of my custom snare drum sticks, since he was preparing to play my piece Mudra in Sapporo. 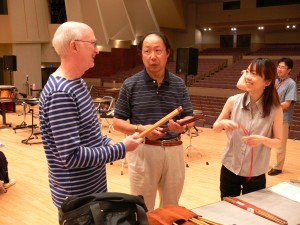 Several years ago I hand-selected five pairs of Sabian cymbals for Shingai-san, which he presently uses in the orchestra. He made the rather long drive from Sapporo to Hokuto, and brought along all of those cymbals! I was surprised and happy because I had brought the suspended cymbals needed for Unseen Child and Away without Leave, but had only enough extra room in my case for one 18″ pair of Sabian’s new Artisan line. Thanks to Shingai, I was able to display and demonstrate a wide selection of sizes and styles of fine Sabian cymbals. 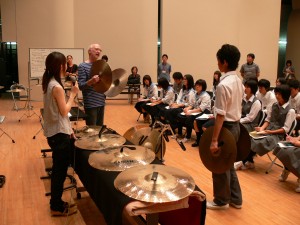 I had performed at the Hakodate Performing Arts Center previously in 2007, and so I was familiar with the fine acoustics of the concert hall. Some of the repertoire chosen for the concert this time required instruments that were not readily available in Hakodate. In particular, Away without Leave calls for some unusual kinds of drums. I contacted my friends at Pearl Corporation in Nashville, and they were able to arrange with the home office in Japan the use of four matched concert field drums and six graduated concert toms. These are the same instruments we use in NEXUS when performing this piece, and so I felt very comfortable with the sound and voicing. My thanks to Pearl for their support for this concert. 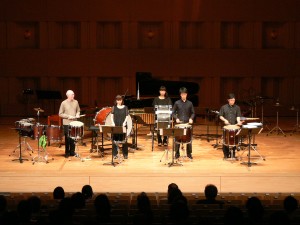 Sumako also made the decision to purchase a two-octave set of Zildjian crotales and a new Malletech XB4.0 xylophone. I was glad to assist her in ordering the new equipment, and the xylophone turned out to be a superb instrument – I was proud of Malletech’s work on it. It was a real pleasure to play, and I think Sumako was very happy to receive it. 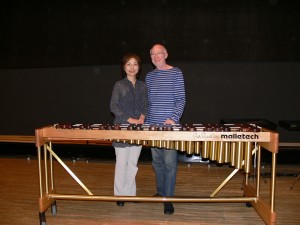 The final concert went very well, and got a nice review in the local press. The complete program included Away without Leave, Prisoners of the Image Factory, Turning Point, Unseen Child, Mudra, Rain Tree, Wings, and ragtime selections Caprice Valsant, Alabama Moon, An Indian Story, Valse Brillante, and States Medley. My solo arrangement of Dance of the Octopus and then Whispering Medley with the ensemble served as encores. 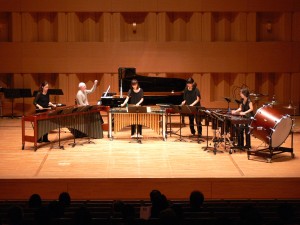 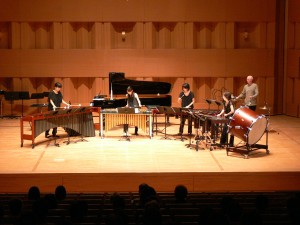 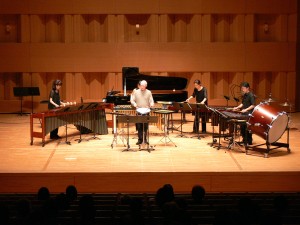 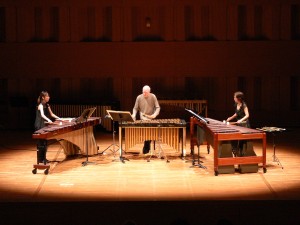 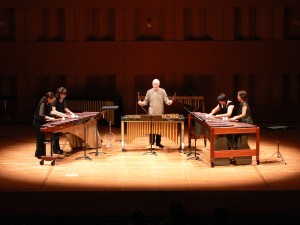 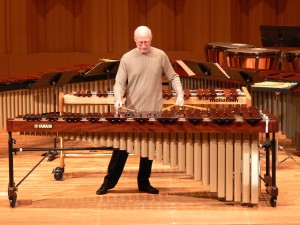 (Dance of the Octopus: my solo marimba arrangement of the Red Norvo classic)

I want to thank Sumako Ichikawa for inviting me back to Hakodate to perform my repertoire with her and the Kodama ensemble. She undertook the difficult job, well known to many musicians, of organizing, presenting and performing in the same concert production. I have a lot of respect for her skills as a musician, teacher and administrator.

Finally, my great appreciation goes to Yurika Kimura who, at various times, acted as my agent, publicist, translator, road manager and musical colleague. It was thanks to her help and guidance before and during my trip, that I could experience a successful and wonderful tour in Japan.