Further to my blog posting on July 26, 2009 (see “On Wings of Song”) the premiere of a new work for chamber orchestra, narrator and children’s chorus occurred on Sunday March 28, 2010 at the Hochstein Performance Hall in Rochester, New York.  The performers were Simon Pontin as Narrator, the Bach Children’s Chorus directed by Karla Krogstad, and the Rochester Chamber Orchestra conducted by David Fetler.

“On Wings of Song” is a 12-minute work that was composed in July 2009 at the request of David Fetler.  The chamber orchestra consists of 1 flute, 1 percussion (vibraphone, suspended cymbal, glockenspiel), and 9 individual string parts  (1st violins A/B, 2nd violins A/B, violas A/B, cellos A/B and double-bass).  The composition is centered around four traditional folksongs about birds – “The Birds’ Courting Song,”;  “The Birds In the Spring,”; “The Cuckoo,” and “Rise, Rise, Thou Merry Lark,” all sung by the children’s chorus.  Here are the lyrics to the first chorus of the English/Appalachian folk song, “Rise, Rise, Thou Merry Lark.”

Whose upward flight I love to mark

At early dawn of day.

And carol forth thy lay!

That swells within thy warbling throat!

‘Tis a stream of melody

That steals the raptured soul away,

My blesings go with thee.

Each of the four songs is preceded by a narration of prose created by the American transcendentalist poet, Walt Whitman.  The narration text is from “Specimen Days and Collect” published in 1881, and it consists of Whitman’s observations about nature and in particular, about birds.  For example:

“Did you ever chance to hear the midnight flight of birds passing through the air and darkness overhead, in countless armies, changing their early or late summer habitat? It is something not to be forgotten. A friend called me up just after 12 last night to mark the peculiar noise of unusually   immense flocks migrating north (rather late this year.) In the silence, shadow and delicious odor  of the hour, (the natural perfume belonging to the night alone,) I thought it rare music. You could hear the characteristic motion — once or twice the rush of mighty wings, but  oftener a velvety rustle, long drawn out — sometimes quite near — with continual calls and  chirps, and some song-notes. . . an unusual melodiousness, these days.”

In the background of each of the five narrations was an electronically-recorded montage of bird calls emanating from a loudspeaker placed behind the orchestra.  Finally, the narration and folksongs are framed in original music that was composed to serve as a unifying structure. First rehearsals are always nerve-racking for composers.  One’s soul is set out on a musical platter for everyone to observe.  The problem with first rehearsals is that usually only unformed and incomplete fragments of the imagined outcome are actually achieved.  However, this time it was different.  Right from the start there was an atmosphere of understanding and commitment in the music.  The Bach Children’s Chorus were fabulous, having memorized the lyrics to all four of the songs.  The unusual requests in the score for the strings to produce certain imitations of bird sounds were immediatedly reailzed, probably because the subject matter was so easily understood.  The percussion part, especially the vibraphone, added a nice balance of mixed sonorities to the string parts.

The performance on March 28 was well attended and the enthusiastic response from the audience was certainly gratifying. 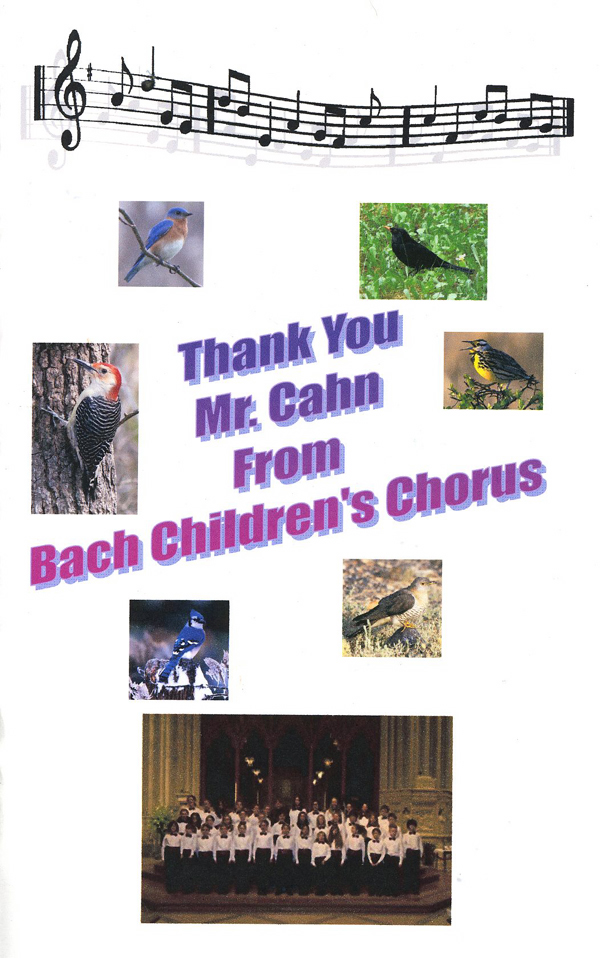