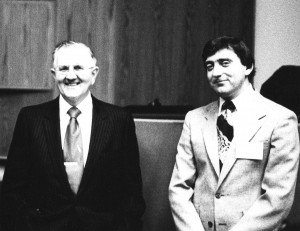 I first met Mr. Hinger at a rehearsal of the Philadelphia All-City Junior High Band in 1960.  His son, Bill Hinger and I were budding 8th-grade percussionists in the Band, and Dan was there at one of our Saturday morning rehearsals at Girls High School on North Broad Street in Philadelphia as a volunteer to coach our very unpolished but eager percussion section.

Mr. Hinger was then the Principal Timpanist in the Philadelphia Orchestra, and he occupied the same position as his celebrated predecessor, Oscar Schwar (see photo below).  In 1960 I had never heard the Philadelphia Orchestra perform live and I had to accept on faith the words of the other percussion students in the junior-high band that Mr. Hinger was just about the best timpanist in the whole world.  He coached our section that day with great enthusiasm.

A few weeks later, he returned again, and the percussion section moved to a rather stuffy classroom having no windows for our sectional rehearsal.  I must not have had breakfast that morning, because after a short while I began to feel faint and dizzy.  I turned white in the face and had to lay down on the floor.  Mr. Hinger opened the door and let fresh air into the room, and after a while I was restored.  That fainting experience changed my life, because Mr. Hinger was very upset about it and after the rehearsal he asked me if I would like to come to his house for a lesson.

My family was not poor, but we certainly could not afford to pay the Principal Timpanist of the Philadelphia Orchestra his normal fee for a lesson.  Mr. Hinger didn’t lower his fee, however; he waived it entirely.   After my first lesson in the basement of his home, he invited me back the following week, and then again, and again for  four more years, never mentioning the slightest word about money.  During those years he repeatedly invited me to lessons backstage at the Academy of Music in the Green Room, and sometimes in the dressing rooms upstairs, where I also had the opportunity to observe many rehearsals of the Philadelphia Orchestra with Eugene Ormandy, a rare privilege. My high school music department also received free student tickets to the Orchestra’s Friday afternoon concerts making it possible for me to attend dozens of concerts, sometimes followed by lessons backstage.

Mr. Hinger even drove me home from these lessons on occasion.  It was unbelieveably thrilling not only to watch Mr. Hinger playing the entire orchestra repertoire in those concerts, but to even ride home from concerts in Mr. Hinger’s Volkswagen bug, and to see him in the prime of life and career wearing his wide-brim Stetson hat.

Lessons with Mr. Hinger were always full of excitement, reflecting his intense energy and enthusiasm for music – everything from tape recorded roll lessons on snare drum, to experiments with tennis balls on timpani, to rudimental articulations in the Moeller snare drum book, to sound on the marimba, to orchestral repertoire .  But the highlight was always to  hear his tone on the instruments when he played and see his touch on his timpani, not to mention having the honor to actually play on those drums.   The focus in my lessons was usually on phrasing; Mr. Hinger created his own idiomatic system of vocal counting and shaping of phrases.  He had very thick and muscular forearms, which must have played a large role in the formation of his unique stroke and touch – very different from traditional ‘German’ concepts.

He was always inspiring as a teacher, and his playing with the Philadelphia Orchestra was even more inspiring.   We students always focused intently on taking in every nuance of Mr. Hinger’s playing.   How lucky I was to be able to hear him perform in so many concerts – “La Mer” with Charles Munch,  “Carmina Burana” with Stokowski, Rachmaninoff “Symphony No.2” with Ormandy, the Brahms symphonies, and so much more.  His playing was always electric, his sound always bright and just right, and his commitment to the music always total.  His ideas about ‘touch,’ sound and technique were totally original and in a way, he created his own unique “American” style of timpani performance.

I was lucky in the extreme to have had the equivalent of 4-years of study at the Curtis Institute – where he was on the faculty – during my high school years. I believe that Mr. Hinger, along with his colleague Mr. Abel and many of the music teachers in the Philadelphia Public Schools made it possible for me to attend the Eastman School of Music to study with William G. Street (who was also Mr. Hinger’s and Mr. Abel’s teacher) for three years and with John Beck (another Street alum) in my senior year.  Hinger’s influence on the formation of NEXUS was profound; John Wyre and Russell Hartenberger had also studied with Mr. Hinger and so we shared many experiences and musical sensibilities about sound and phrasing.

Years later, we in NEXUS had the good fortune to visit with Mr. Hinger in Huntsville, Alabama during the last year of his life, and even through the personal difficulties he faced in his illness, his eyes lighted up, his knowing smile appeared, and his enthusiasm to join in the discussion emerged whenever the subject of playing timpani was in the air.

Mr. Hinger gave us all the great gift of his musicianship and his humanity.  He gave me the gift of a life in music.  I will always be grateful for the generosity of his spirit.  Thank you Dan. 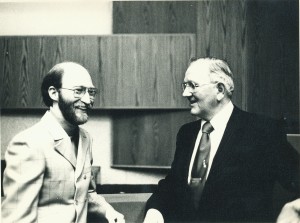 “I’m almost certain that [1981] is the year of your photo too (I was not at that PASIC in 1976 [as originally captioned above], although I know Hinger was featured there). The two photos were clearly taken in the same place, and Hinger appears to be wearing the identical clothes in both. There was a percussion day at Eastman in 1981 where Hinger gave a clinic (in that room we used for our seminars the past two summers). I remember a bunch of us going out to dinner together afterward.”

Upon checking both photos and reading Bob’s email, I have indeed come to the conclusion, along with Bob, that both were taken in 1981. 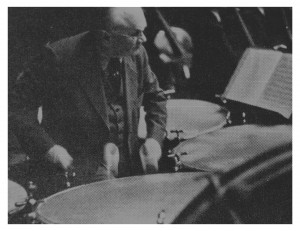 I was Principal Percussionist 33 years with the Metropolitan Opera Orchestra and had the extreme pleasure to play with Dan Hinger for 16 years prior to his having to retire.. Danny was a very good Friend and Gentle Man.. His zest for life and love of his dear Wife Jean and two children thrilled me as even between some Saturday’s two performances he would drive across the george Washington Bridge to have dinner at Home and return for the evening fun at the Met.. He had a great sense of humor and he and I spent endless hours talking about… Read more »

Fred Hinger was my teacher for four years at Manhatton School of Music, and they were great years. I learned the ropes of timpani playing from him, and held him in awe. I had the pleasure of sitting beside him at the Met during performances of La Boheme – Otello, Death in Venice, and Madama Butterfly, and sat in the hall for performances of Rosenkavalier, Don Pasquale, and Gotterdammerung and Walkure among other operas. His sound was incredible – his concept of “touch” was and remains unique. I remember the lessons at his house in Leonia, and at times he… Read more »