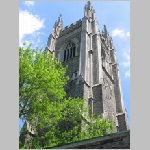 In a couple of weeks NEXUS is performing at the University of Toronto. As “Ensemble in Residence”, NEXUS has had a long and fruitful relationship with the University, and a great many percussion students come to U of T specifically for the opportunity to study with NEXUS members. Russell Hartenberger is the Dean of the University’s Faculty of Music, and instigated the wonderful Talking Drum Symposium that took place on two U of T campuses in October.

For its inaugural season and several after, NEXUS was featured at the Toronto Summer Music Academy and Festival which took place at U of T. Robin Engelman was long-time adjunct professor of percussion at U of T, and conductor of the U of T Percussion Ensemble. In the best sense of reciprocity, Robin brought his expertise to the Ensemble, and the Ensemble gave Robin an opportunity to seek out and to create new works. NEXUS is continuing a fruitful relationship with the Ensemble. The Faculty Artists series at U of T has annually presented NEXUS in concert and over the years this has provided an opportunity for NEXUS to premiere new work. To cite two examples, Christos Hatzis’ Four Rituals for Percussion Quintet, Choir and Audience, and Bob Becker’s Cryin’ Time were both premiered at Faculty Artists concerts. There are many other connections as arts, education and NEXUS intertwine in a long braid of shared interests and opportunities.

As mentioned in my last post, the NEXUS concert in U of T’s Walter Hall on January 22 at 7:30 has them sharing the stage with a list of guest artists that have all sorts of U of T connections: Phil Nimmons, David Braid, Suba Sankaran, Parmela Attariwala, and saxophonist Mark Laver.  So come and check it out. And while you are downtown, why don’t you make a day of it and check out the great new architecture and surroundings. Take a walk down U of T’s Philosopher’s Walk behind the Faculty of Music – even in winter, it is a lovely walk, while only steps away from the hurly burly of Bloor Street – and see the Royal Ontario Museum’s astonishing new Crystal addition (there are lovers and haters, I happen to be a lover), and the strong new addition at the Royal Conservatory. The Gardiner Museum of Ceramic Art across the street also has a handsome new addition and always has unusual items on view. Queen’s Park is mere steps away with its quiet wooded pathways and great bronze statues. Then end your day with NEXUS!