KIDS AND CONCERTS    We kicked off 1998 with 3 months of intensive touring, beginning with Canada’s National Arts Centre where we presented our new commissions and a new piece by John Wyre called Still Life. We would come back to the NAC in May for 3 more concerts with its orchestra under Boris Brott. From… Read more » 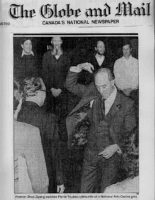 1977:   FIRST NEXUS COMMISSION   Bob Becker tells us that “The first piece commissioned by NEXUS came from the Canadian composer Bruce Mather in 1977. (We would premiere it in April ’78.) At that time, Bruce’s music was known only vaguely by most of us, but Robin Engelman had become an admirer. He made the commission… Read more »