#NEXUSat50   1982   KIDS CONCERTS   Remember all those school concerts we mentioned in our 1982 UK tour? Here are two photos: NEXUS performing “Kobina”, one of our African-inspired pieces, at The Leadmill in Sheffield; and another shot of our appearance playing ragtime on the popular #BBC children’s show “BluePeter”. “Blue Peter” is still going strong, having run continuously since 1958 – making it the longest-running children’s TV show in the world! The Leadmill likewise is still going – the longest running live music venue and nightclub in Sheffield. (Are we coming up to the longest-running percussion ensemble??) It’s in a former flour-mill that has been beautifully restored. 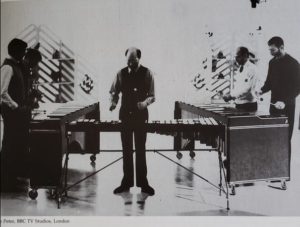 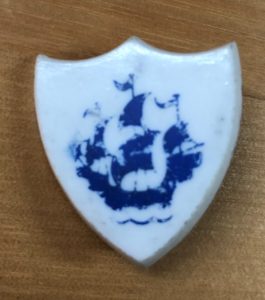 RUSSELL’S BLUE PETER BADGE!    Russell has sent a photo of his badge from NEXUS’ 1982 appearance on “Blue Peter”. They gave one to each NEXUS member when we appeared on the show, and they are treasured items in England. They are worn by the presenters and given to adults appearing on the show and to children aged 6 to 15 in recognition of various kinds of achievement. They have been given out since 1963 and the wearer can obtain free admission to a number of British attractions, especially ones that have been featured on the show. But beware: If one gets in trouble with the law, you can be asked to turn in your Blue Peter Badge! #NEXUSat50   1980s   ACCOMPLISHMENTS    Bob Becker answers a question from Daniel Smithiger: “Of what things are you most proud, in the accomplishments and history of NEXUS?”       BobB: “I generally don’t view pride as a virtue, but I think NEXUS has accomplished some significant things over its career. As you know, the group began as an improvising ensemble, using an extremely personal and unusual collection of sound sources. The way “repertoire” began to be incorporated into our concerts was also not traditional, since for several years we did not plan our concert routines. Nevertheless, pieces sometimes appeared during the course of an evening’s improvisation, and this naturally led to our very eclectic approach to programming, which continues to the present time [2009]. I think this kind of thing was new in the small world of western percussion ensembles during the 1970s and 80s, and it opened conceptual doors for the many groups that have followed us. NEXUS did a great deal of international touring during the 1980s, and I know for a fact that our approach inspired a number of fledgling European percussion groups who have gone on to major international careers. In a way, we parented an approach to presenting percussion performance and repertoire that is still used as a paradigm around the world.”

#NEXUSat50   1986   DOWN UNDER    It was a year of exceptional festivals: in Canada, Ontario’s Guelph Spring Festival and the Festival of the Sound in Parry Sound; Vancouver’s Expo 86 (more about this in another post), and in Australia the Perth and the Adelaide Festivals, plus other wonderful tour stops in the architectural wonder of the Sydney Opera House, in Melbourne, and in Wellington New Zealand. Bill Cahn has been disassembling scrapbooks so as to scan and share with us the programs. He also shares a great story of how Russell Hartenberger revealed a totally new aspect of his character at the Adelaide Festival: “In front of all the well dressed patrons in the front rows and in the standing room only gallery, I watched Russell walk barefoot and bare-breasted onto the stage, without any noticeable concern, to deliver an electrifying performance of ?Corporel, a percussion solo for the human body by Yugoslav composer Vinko Globokar, during the course of which Russell slapped all the exposed skin on his body, rolled around back and forth on the stage floor, drummed on his head, popped his mouth, clicked his tongue, uttered a plethora of guttural emanations into a microphone, and screamed at the top of his lungs.               I never ever suspected he could do that!”    Read more: Bill Cahn’s book “Unpopular Music”, available in digital download from billcahn@aol.com