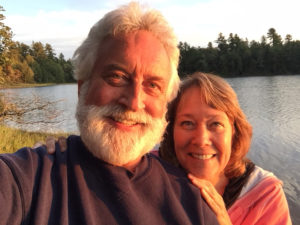 Diane and I have been campers ever since our daughters were very young, for 30 some years. We started camping on our honeymoon in 1977 in central Saskatchewan, using a small pup tent and traveling by canoe on a huge lake for a week without seeing a soul. When the kids were young, we upgraded to a pop-up tent trailer but still went into remote areas without any hook-ups or other modern conveniences. It’s back to just the two of us now that the kids are grown up. We’ve graduated to a travel trailer, another “upgrade” to make camping a little easier. We are now officially among those we used to make fun of. We camp mostly in New York State campgrounds where there is no electricity, running water or any of the things we take for granted in modern life. Believe me, I am not complaining, just explaining! As life gets increasingly busy, we look forward to these “unplugged” vacations more than ever.

This summer we went to one of our favorite places near Tupper Lake in the Adirondack Park. We always have a Woodstock Chime with us and this year it was the Magical Mystery Chime – Butterfly’s Farewell with octave doubling. Camping helps slow you down, forces you to relax and focus on life. I have to say, so does listening to this beautiful chime, which is tuned to a pentatonic scale from the finale of the Puccini opera Madame Butterfly using a special acoustic effect called octave doubling. It harmonizes with nature and sounds great accompanying the call of the famous Adirondack loons! I don’t mean this to be a commercial and I know I am biased, but just like being out in the wilderness, this chime helps me slow down, relax and focus on what’s important: Life!

Not really roughing it, Garry