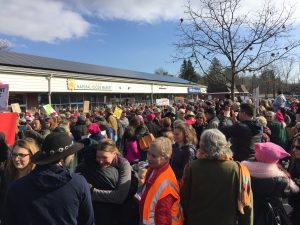 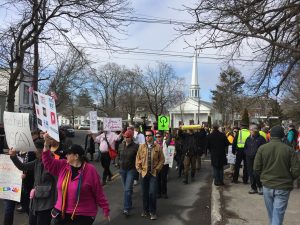 On Friday night Jack DeJohnette played a spectacular piano concert at the Woodstock Byrdcliffe Guild to an overflowing audience. He called it the Concert for Inner Peace. Jack is known as one of the very finest jazz drummers on the scene today, but his first instrument was piano and his range of styles and his deep musical expression was heard that night on this percussion instrument, the piano. He ended the concert by accompanying himself in his version of “Imagine” by John Lennon. The next day, hundreds of people showed up in town for the Woodstock Women’s March. This was an all-inclusive gathering that attracted men and women, young and old. The community here in Woodstock is a close one and I am happy to call Jack a friend and to have been a part of this gathering of artists and local folks making a positive statement about dignity and human rights. Here’s a photo of Jack and me at the rally. 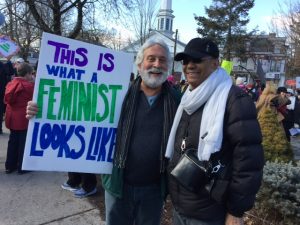