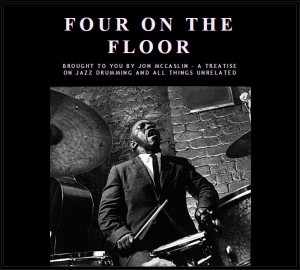 I’ve been meaning to mention for awhile now the super blog-post from Jon McCaslin about NEXUS. Check it out here.  Jon includes some nice video footage too: NEXUS performing Steve Reich’s Music For Pieces of Wood, Steve Gadd tap-dancing to NEXUS, and Duke’s Lullaby featuring Steve Gadd and Abraham Adzenyah with NEXUS.
Jon happens to mention that the one Toronto concert he heard of NEXUS was the all-improvised concert with Phil Nimmons and David Braid a couple of years ago at the New Music Festival. That was a phenomenal night, for sure! Perhaps only slightly more phenomenal is that Phil just celebrated his 90th birthday last week!
Thanks for the great post, Jon! (And Happy Birthday, Phil!)