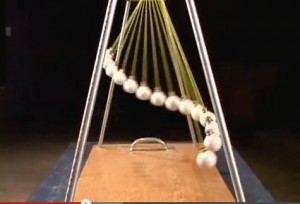 Garry Kvistad, our resident “science guy” sent me this video awhile back. Take a minute and a half to check it out.
Kind of amazing, isn’t it! The video was posted on Harvard’s Science Demonstrations site which tells us that the pendulums “dance together to produce visual traveling waves, standing waves, beating, and random motion.” Words like “choreography” and “kinetic art” get bandied about. Then they explain exactly how it works, how it was set up and how the apparatus was built, so you can do it for yourself! No wonder Garry was interested – he’s always building things – and most of the things he builds involve the Science of waves: Sound waves, that is.
Garry is a member of the Acoustical Society of America (you can read about this august group here.  They (like Harvard) have a wonderful website with all sorts of cool things, like the section where you can listen to some Mystery Sounds and try to guess what they are! (Scroll to the bottom to find the Mystery Sounds.)
Garry offers a NEXUS workshop dedicated to the acoustics of percussion. He calls it Sound Advice and it is all about the science of sound.  He talks about how instrument builders use science, and how performers can use the same to make music – how understanding the acoustic properties of percussion instruments help a performer “make better musical choices”.  He talks about instrument and mallet choices and playing technique. He demonstrates some acoustical phenomenon and takes a look at gamelans, steel pans, Bach and Partch!
While you are over at the Harvard site, check out their other sound demonstrations. Clicking on “Sound” or on “Music” in their left-side list will take you to demonstrations on the Velocity of Sound, Sound Cancellation, Double Sound Source Interference, Refraction of Sound, Sound Reflections in Pipes, a Doppler Ball (a “Plastic Wiffle Ball with built-in shriek to throw past (or at) your audience”!), Doppler Tuning Forks, Generating 3D standing waves in a lecture hall, Changing the pitch of organ pipes by changing sound velocity, Baffling, A single string instrument the “Monochord”,  Siren Discs, Musical beer bottles, Galton whistles, Fourier synthesizers, and a “Pink noise” generator! Garry is  probably surfing over there right now….or building some of these things in his workshop!

You may be interetsed in a simulation of pendulum waves I created that plays a tone as each pendulum hits its apex. I blogged about it here:

Thanks Simon! Very interesting, and much appreciated!