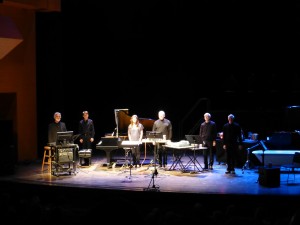 Thanks to everyone for the great turn out at the Fisher Center, Bard College, for this weekend’s revival of “The City Wears a  Slouch Hat”, John Cage’s 1942 radio play. The evening was a great success. It was called “John Cage: On & Off the Air! ” and it was designed to spotlight Cage’s fascination with technology and his interest in radio as both a medium of transmission and as a musical instrument. Thanks to Julian Lines for two photographs, shown here, taken at the performance of “…Slouch Hat”. What you cannot see in these photos is the film component commissioned from Mikel Rouse. NEXUS also performed Cage’s “Credo in US”. They spent Sunday recording the percussion parts to “…Slouch Hat”. Eventually the actors’ voices will be added to the recording. An unusual piece for the NEXUS repertoire, indeed! 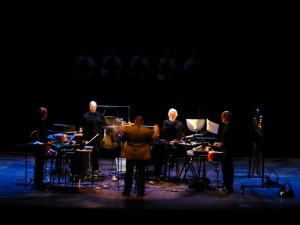 NEXUS also managed to include a side-trip to Woodstock Chimes while they were in the area, and had a fun afternoon performing for everyone there. Then it was time to pack up and head for home. Busy weekend!