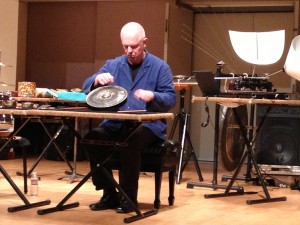 What a great week! NEXUS was honoured to be a part of Soundstreams’ 30th Anniversary Spectacular at Koerner Hall. It was an ear-opening concert, beautifully presented, and a fitting tribute to Lawrence Cherney and Soundstreams, and their many accomplishments. Reviewer Margaret Lam wrote: “The works were presented by some of the best musicians this country has to offer: Nexus performed Reich’s hypnotic Clapping Music and Mallet Quartet with such ease and grace, each of the performers were like extensions of each other.” You can read her full review of the evening here.
Then on Friday afternoon NEXUS and the University of Toronto Faculty of Music hosted a workshop with Swiss percussionist Fritz Hauser who is on tour in North America. We had a great turn-out, thank you to everyone who joined us.  There were three workshop segments. In the first, Fritz did some work with individual students and spoke about his FOCUS flashcards, his practice regimen, and about percussion education. He then performed a shortened solo version of his Shraffur on a small gong. Then NEXUS and Ray Dillard joined him for a 20 minute improvised piece. It was recorded so we will keep you posted on that. Bob summed it up: “The session was very interesting  – and provocative!”

You can check out rehearsal photos for the Koerner Hall concert on our Facebook page.

Next up:  The City Wears a Slouch Hat in Austin TX