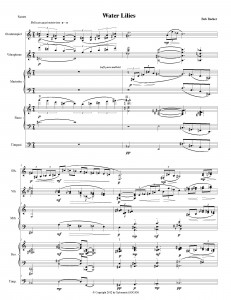 I had a very intense spring season, with NEXUS performances in California, Arkansas, Georgia, Ohio and New York, as well as extended solo tours of my own in Ohio, Indiana and Arizona. Usually I am unable to compose while traveling, and also I find it difficult to work creatively on writing projects without having at least a one-week window to get “into the zone” again. It’s one of the reasons my composition output remains limited, although it has been at least somewhat steady since I began working seriously back in 1990.

When time has permitted during the past six months, I have been working on my next project – a piece for piano, marimba, vibraphone, glockenspiel and timpani. The orchestration is a continuation of an instrumentation I used in my previous piece, Preludes, commissioned by and premiered at the second Roots and Rhizomes Percussion Residency at the Banff Centre for the Arts in August, 2011. Preludes includes a string quartet as well, but I wanted to focus more on the percussion sounds in the current piece, which has a working title of Nymphéas (after the sublime series of paintings by Claude Monet). The final title may be Water Lilies, the English translation.

Some answers to questions about my compositional approach are posted in my Articles and Interviews area (see the interview with Jonathan Latta, for example), and there is a short statement “About the Music” on my Compositions and Publications page. I have often quoted a poem by the Montréal poet Louis Dudek to illustrate the general sensibility behind my core inspiration for writing music.

We make our freedom in the laws we make,
And they contain us as the laws we break
Contained a remnant of an ancient music
That a new music in its laws contains.

Around ten years ago a German visual artist asked me to try to express my ideas about composing. His plan then was to create visual imagery – in the form of a painting – based on whatever text I sent him. I finally wrote the following short poem, hoping to express feelings about craft, structure and inspiration in my work at the time. In fact, the underlying melodic and harmonic relationships used in my music have remained the same since I wrote A Matter of Scales. To my knowledge, the artist in Germany did not create a painting based on my poem. After sending it to him, I never heard from him again.

A Matter of Scales

Call them:
a and b
down and up
whole and half
on and off
out and in
purple and pearl.

Define one frequency,
all are instantly defined.

Step upward or downward,
the movement is discrete.

There is no smaller world.

Midnight and the moon,
nine points of specific plan:
half and half and whole,
out and out and in.

A scale of scales to encase the one
pealed from beak or bell.
Relationships exist.
Find them where you can.
Name them if you will.