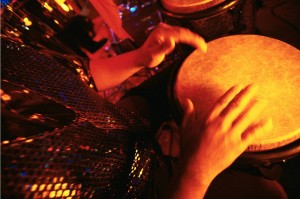 The last two weeks of October have been rich in concerts and unexpected percussion influences. It kicked off mid-month with the wonderful SFJazz Collective presenting their take on the rhythmic-rich Stevie Wonder repertoire as well as a selection of new compositions at Koerner Hall here in Toronto. A couple days later, NEXUS presented their glorious exploration of new works with 2X10 at Walter Hall.   Naturally, the Walter Hall concert has led into lively discussions of NEXUS’s programming plans for next year, so be sure to stay tuned!

Next, my son, an aspiring jazz pianist, attended an Ari Hoenig concert at the Rex. He is still talking about it, and says Hoenig has changed his approach to all things rhythmic. I hear complicated rhythmic patterns coming out of his practice room, and “phasing” patterns a la Steve Reich. Who knows where this will lead?

The month just ended with my husband, (woodwinds), stumbling serendipitously on a cut from an album of percussionist Trilok Gurtu with Weather Report co-founder and composer Joe Zawinul, entitled Ballad for 2 Musicians. (The album is The Trilok Gurtu Collection) You can hear some cuts of Zawinul and Gurtu performing together here.

Zawinul is quoted as wanting to use “all the sounds the world generates.” Certainly it was his unique sound that caught our ears! Gurtu is also one-of-a-kind. He began his studies on tabla and moved to drum set as his interest in jazz evolved. Some of his intriguing experiments include vocal improvisations with John McLaughlin using the Indian tala talk method of oral drumming notations for teaching drum patterns, with Kai Eckhardt joining in “with hip-hop beat-box vocals for a three-way vocal percussion jam”. Gurtu often plays without a drum stool, in a half-kneeling position on the floor, and he uses an unconventional kick drum resembling a large drum head with a kick-pedal, along with a mix of tablas and western drums. Wikipedia tells us that “Gurtu’s unique percussion signature involves dipping cymbals and strings of shells into a bucket of water to create a shimmering effect.”

Taken all together, it has been an ear-opening couple of weeks!